In preparation for the release of the already epic sci-fi reboot by JJ Abrams, Paramount has released Blu-Ray editions of the 1966 TV series, as well as the first 6 original films, available as a complete set or a 3 picture set featuring The Wrath of Khan, The Search for Spock and The Voyage Home, which is what has been released for review. 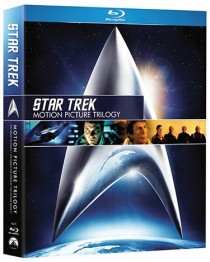 The Trilogy boxed set begins with arguably the best Star Trek film ever lensed, Star Trek II: The Wrath of Khan. Director Nicholas Meyer filled The Wrath of Khan with class and what was at the time, a completely new vision for the fleet. Everything from the costume design, to the classical literary references, to James Horner’s incredible music, steered the franchise in a new, more grounded direction (at least for the next few films).

Ricardo Montalban controls the show as Khan, an old enemy of Kirk’s who’s looking for revenge and a potentially destructive device. This is easily one of the best sci-fi films ever produced, and it looks stunning in HD. This film and it’s extras alone, are worth the cost of the set.

The Search for Spock picks up just hours after The Wrath of Khan ends, with the Enterprise and a weary crew returning to Earth. Kirk soon meets Spock’s father, Sarek, who assumes that Kirk is possession of his son’s Katra – Spock’s spiritual essence, which is traditionally passed on before death. Admiral Kirk and his bridge crew risk their careers to recover Spock’s body by going back to the now-quarantined Genesis planet where he was laid to rest, not knowing that the Genesis device has rejuvenated more than just the planet.

The Search for Spock is an enjoyable adventure, though it’s not up to the level of quality of Part 2. It also makes for a nice addition to the set, and continues the story line set so wonderfully into motion in the second film.

The three-disc set is rounded out with Star Trek IV: The Voyage Home, which features Kirk and his crew going back in time in an effort to save Earth from an alien probe, by retrieving humpback whales, apparently the only beings who can communicate with it. The movie begins on the planet Vulcan, where the crew has just voted to return to Earth and face a possible court martial for violating orders and stealing the Enterprise, while Spock’s spirit is reunited with his body.

The Voyage Home neatly wraps up the strongest three of the original series cast Star Trek movies, and has much more levity than the previous two films, making for some fun and entertaining moments. While part four isn’t on my list of favorite sci-fi adventures, it acts a window to the completely new story lines that followed, and I enjoyed the way the film doesn’t take itself too seriously.

As with the other two discs in this box set, extras from previous DVD releases have been ported over, including the commentary track featuring Nimoy and Shatner, which had audio that was a bit low. There are also a few new HD extras, including Walter Koenig recallingn Chekhov’s big moments in the film.

My only complaint with this box set is why Part One The Original Motion Picture was not included in the set.