Samuel L. Jackson lights up the screen as a rehabilitated alcoholic named Doyle Gipson, who’s trying to put the pieces of his life back together. The largest part of his struggle involves his two children, and on this particular day, he’s trying to get to family court in an attempt to win their custody. He’s cut off in traffic by Gavin Banek (played by Ben Affleck), a lawyer late for his own court appointment, and Gavin causes Doyle to have an accident on the road. Gavin briefly apologizes, but selfishly leaves Doyle to fend for himself, who winds up being 20 minutes late for his child custody appearance. 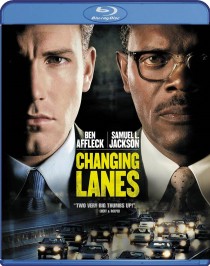 At the same time, Gavin realizes he’s left an important document at the accident scene – one that would help him win an important case. When Gavin realizes that Doyle has his file, Gavin tries to employ some shady tactics to retrieve it, while Doyle thinks it’s time for a little pay back.

Jackson and Affleck give solid and convincing performances, playing their roles as opposing sides of the same problem. As they both try to solve their own issues, they don’t realize that they actually need each other to do so successfully. Racial issues are confronted head-on in Changing Lanes, in ways most films wouldn’t dare attempt, leaving the viewer with much to consider after watching. The film is at it’s most brilliant when it teaches life’s lessons, while remaining a thrilling piece of entertainment.

Bonus Material
Director Roger Michell is featured on the commentary track, discussing, among other things, how 9/11 affected the production and the logistics of shooting in New York City. The director also reflects on the cast and crew, and what it was like working with Affleck, Jackson and the rest of the crew. Then there is The Making of Changing Lanes, which is just what it sounds like – a fairly typical making-of featurette, which contains interviews with the cast discussing their experiences working on Changing Lanes. The six minute A Writer’s Perspective, features interviews with Chap Taylor and co-writer Michael Tolkin, talking about what drew them to the material. Two deleted scenes follow that featurette, including one that cut out an appearance from Bradley Cooper (Alias, Midnight Meat Train). There’s also an extended version of the confessional scene featuring Affleck. The original movie trailer, presented in in HD, completes the extras.