In 1942 the Nazis cut a deadly swath through Russia. Under the leadership of Kruschev (Bob Hoskins), the citizens of Stalingrad begin to mount a brave resistance, encouraged by the exploits of their local hero, Vassili Zaitsev (Jude Law). An expert sniper, Vassili’s feats become legendary – thanks to propaganda produced by his best friend and ally, Danilov (Joseph Fiennes). 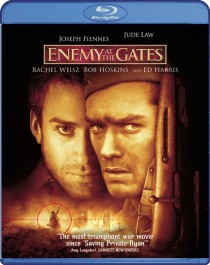 The Nazis grow increasingly weary of Danilov’s rhapsodic accounts of Vassili’s heroic conquests.To stop the brave sniper, the Germans dispatch their own legendary shooter, Major Konig (Ed Harris), to Stalingrad. When Vassili and Danilov both fall in love with a beautiful soldier (Rachel Weisz), Danilov deserts his friend, leaving Vassili to face his German counterpart alone. As the city burns, Vassili and Konig commence a strategic game of cat and mouse, waging a private war amongst themselves, as war and death rage on between them.

Enemy at the Gates is simply one of the most well-crafted war films I’ve ever watched. Brilliant, realistic and entertaining from beginning to end, the movie is flush with immense talent, magnificent sets, lush cinematography and unrelenting tension. Jean-Jacques Annaud created a highly under-rated gem, that deserves so much more recognition than it has received over the years.

There haven’t been many films that have focused on the conflict between Russia and Germany, during World War II, and Enemy at the Gates is a realistic and at times brutal take on a story that could very well have been lost.

Bonus Material
This new Blu-ray release offers a superb transfer of the film, which retains its original gritty tone and rich depth of color. Bonus materials include featurettes from a the previous DVD release, starting with the making-of short film Through the Crosshairs and Inside Enemy at the Gates, which includes interviews with the cast and crew, as they discuss their characters from the film. The bonus material is capped off with a few deleted scenes and the original theatrical trailer in HD.