Dexter: The Second Season made its way to Blu-ray Disc on May 5th, from Showtime Networks, CBS Home Entertainment and Paramount Home Entertainment. Based on the novel Darkly Dreaming Dexter by Jeff Lindsay, Dexter is an incredibly addictive crime drama that stands out as utterly original, darkly funny, and completely engrossing. Season two of the show continues the tale of vigilante serial killer Dexter Morgan (Michael C. Hall), with guest performances from an array of stars including Keith Carradine (Nashville), JoBeth Williams (Poltergeist) and Jaime Murray (Valentine). 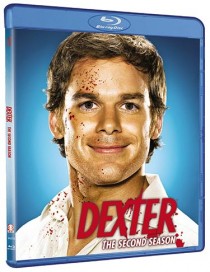 As we know from Season One, by day Morgan is a forensic analyst for the Miami Metro Police. By night, he explores a much darker side of his forensic abilities. The problem right now is, whether he’ll get the chance to kill anytime soon. As the second season opener begins, it’s been a few weeks since the end of season one, and it’s a wearisome time. Doakes (King), now more suspicious of Dexter than ever, has been tailing the anti-hero around, making Dexter’s next kill much more difficult. Meanwhile, Dexter joins a bowling team to look more normal, in an effort to get Doakes off his scent. Teamed with Vince (C.S. Lee) and Angel (David Zayas), this is a hilarious setup for Dexter, whose team is aptly named Bowl Till You Bleed. When Dexter finally gets the chance to kill his latest target, something goes wrong, causing him to feel great doubt like he’s never experienced before.

Aside from the season two opener, It’s Alive!, which sets up a number of issues for the season to come, including Dexter being unable to follow through with his latest murder, and the police finding burial ground, some of my other favorite episodes from Season Two include: See-Through, featuring Dexter continuing to try and throw a persistent FBI Agent off his trail; Dex, Lies & Videotape, which follows Dexter and Lila finding a new way to relieve Dexter’s compulsive urges, while he grapples with family issues surrounding his step-dad; and Resistance Is Futile, which sees Dexter continuing to deal with romantic issues, while trying to avoid detection by an ever-increasing threat from the FBI and Doakes.

The image quality of the Blu-ray discs carry over extremely well from the TV series, and the presentation delivers the same quality as the HD broadcast. Dexter: The Second Season is a three-disc set presented in 1080p High Definition with English 5.1 Dolby TrueHD and Spanish 5.1 Dolby TrueHD sound.

Bonus Material
I’m still not crazy about Showtime’s decision to house the choice bonus material on BD-Live, but that doesn’t mean they weren’t worth downloading. However, there are no audio commentaries, featurettes or deleted scenes on the discs. There is a weak trivia game called Tools of the Trade. The object is to identify Dexter’s tools and put them in his bag using the arrow keys on your remote control. Other than the game and a couple of trailers, that’s about it for extra material on the discs themselves. BD-Live offers extended extra features, including Michael C. Hall podcasts and episodes of Showtime’s United States of Tara. There’s also a featurette called Blood Fountains, which consists of coverage of an “art project”, consisting of a number of fountains in cities all across the country that were turned red. Also included is the Dark Defender Series, three shorts chronicling the deaths of three individuals at the hands of the Dark Defender. The BD-Live extras are rounded out with brief video interviews with David Zayas, Erik King, Jennifer Carpenter, Julie Benz, Keith Carradine, Lauren Velez and Michael C. Hall.

Below a complete list of the episodes available in the set.