Hey, Cameron. You realize if we played by the rules right now we’d be in gym?

It’s amazing how I view John Hughes cult classic high school teen comedy Ferris Bueller’s Day Off today, compared to when I first watched the film in 1986. I was actually in high school at the time, and saw the film as a hilarious look at what my senior year could be, if I was lucky (minus the classic Ferrari and pancreas for lunch). For me, Ferris Bueller’s Day Off was a hilarious look at suburban rebellion at its finest – No alcohol, no addiction, no hating your parents – just a bunch of kids trying to enjoy their last few moments of freedom before real life comes calling. 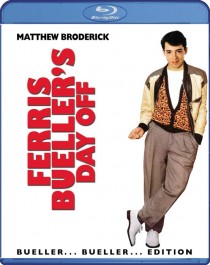 Today I view ‘Ferris Bueller’ almost exactly the same way. Writer/Director John Hughes was at the height of his powers, able to understand the thoughts and desires of American teens across the U.S., he created a savagely original character, who enjoyed classic impressionist painting, fast cars, pretty girls and bada-bada-baseball. It really didn’t matter where you were from. Everyone was cool with Ferris – everyone wanted to be Ferris – everyone has a part of Ferris in them. It seems Ferris Bueller was blessed with a uncanny sense of luck, living life almost with a sense of nirvana. That’s what we all wanted back then.

Ferris Bueller’s Day Off chronicles the events of a whirlwind day-off, as a rather magical young man named Ferris (Mathew Broderick), decides to take his closest friend Cameron Frye (Alan Ruck) and his best girl Sloane Peterson (Mia Sara), on a tour of downtown Chicago, toward the end of their senior year. Together, they impersonate their parents, visit the largest art museum in the city, look down on their potential future selves from the top of the Sears Tower, learn how to relax a little and sing on a parade float.

The question is, will Ferris’ grand day be cut short by his overbearing principal Rooney (Jeffrey Jones)? Or perhaps his uptight and jealous sister Jeanie (Jennifer Grey)? Or the fact that he’s just trashed Camerons dad’s car, which took six years to restore?

With Ferris Bueller’s Day Off, John Hughes proved that you can create a mostly clean suburban teen comedy (although Charlie Sheen was hilarious in the police station), make it funny, and get the audience to care about your characters. It’s simply an essential piece of 1980’s American teen culture.

Bonus Material
The bonus features on the disc are taken from a previous DVD Edition. There are some nice retrospectives, including Getting The Class Together: The Cast Of Ferris Bueller’s Day Off and The Making Of Ferris Bueller’s Day Off, which is probably the most interesting extra on the disc, as it talks about how this amazing film and it’s characters were created. There’s a biography for Matthew Broderick fans, on the disc, called Who Is Ferris Bueller?. There’s also a featurette about the social studies teacher role played by Ben Stein, called The World According To Ben Stein, and some footage taken from the set, titled Vintage Ferris Bueller: The Lost Tapes. The bonus features are rounded out with a photo gallery called Class Album. A really nice set of extras, especially if you don’t have the DVD edition from 2006.