The Man Who Shot Liberty Valance united two icons of the screen for the first time, and legendary director John Ford surrounded them with an ensemble group of incredible talent, to tell a tale that has stood the test of time. The enduring story is set in the 19th century, and follows Senator Ransom Stoddard (Stewart), as he returns to the frontier town Shinbone with his wife Hallie (Vera Miles). The couple have returned to their former home, to attend the funeral of an old friend named Tom Doniphon (John Wayne). 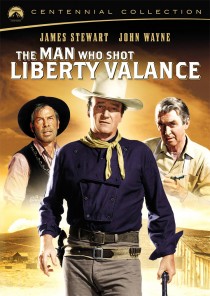 A flurry of questions from local reporters, demanding to know what makes Doniphon’s funeral worthy of a senator’s attendance causes Stoddard to flashback to when he first came to Shinbone as a young lawyer. The extended flashback begins as an outlaw named Liberty Valance (Lee Marvin) robs Stoddard’s stagecoach, and after vehement protest, the larger-than-life Valance nearly beats Stoddard to death. The incident sets Stoddard on a path of revenge.

However, Stoddard doesn’t want to kill Valance, but send him to jail for his misdeeds. The lawyer pursues his lofty goal and in doing so, becomes close to the rugged, local rancher Doniphon, the man who helps him attempt to stop the vicious Liberty Valance.

The Man Who Shot Liberty Vance is a quality work of filmmaking by director John Ford, with a perfect cast that reverberate effortlessly from the screen. Adding to the presence of so much talent, is the natural chemistry between Wayne and Stewart, unlikely friends in a raw and violent old west, not seen in many popular studio films of the time.

Bonus Features
The Man Who Shot Liberty Valance is part of the Paramount Centennial Collection, which was launched in November 2008, and features some of the most treasured films from the studio’s nearly 100-year history. ‘Liberty Vance’ is another triumphant edition to the collection, digitally re-mastered in brilliant clarity. The two-disc presentation includes an eight-page collectible booklet that’s full of photos and two pages of text.

Disc One features a stirring commentary by filmmaker Peter Bogdanovich, along with his archival recordings of interviews he conducted with John Ford and James Stewart. There are also select scene commentaries with the director’s grandson Dan Ford.

Disc Two features a 7-part featurette called The Size of Legends, The Soul of Myth, that runs almost an hour. In it, there are a number of new interviews including Richard Schickel, Peter Bogdanovich, Scott Eyman, and Dan Ford, along with audio recordings of John Ford, Jimmy Stewart and Lee Marvin. The documentary is informative, and dissects the film very well.

The bonus features are rounded out with galleries with stills of John Ford, the Production, Publicity, and Lobby Cards.