The hit Broadway musical Grease, became a hit film in 1978, featuring rising star John Travolta, Olivia Newton-John, Frankie Avalon and Stockard Channing. The movie firmly established Travolta as a versatile superstar actor and performer, and professional singer Newton-John grounded the project as a stylized musical powerhouse. While Grease may not compare with some of my other favorite musicals, like West Side Story and Carmen Jones, the music and dance numbers are forever infectious, and the charisma of the film’s stars bursts from the screen, making this simple story of love and being one’s self, one of the most adored screen musicals of all time. 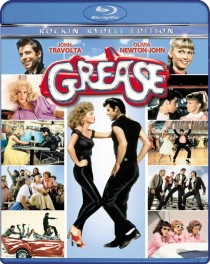 During their 1958 summer vacation, Danny Zuko (Travolta) and Sandy Olsson (Newton-John) meet on a beach. We see scenes from their holiday together, as run along the beach, play in the sand, and enjoy their time together. Then summer ends, and the young lovers say their last goodbyes. Sandy is returning to Australia terribly upset, assuming that this is the end of their romance and that they will never see each other again. Danny tries to comfort her before heading back to his California home. However, when the fall term begins at Danny’s high school, Sandy shows up, after her parent’s plan to return home change. However, Danny never mentioned he was a member of the local greaser gang called the T-Birds, and after a reunion setup by Sandy’s new friends The Pink Ladies, Danny gives her the cold shoulder, in order to maintain his reputation with his crew. Greasers just don’t hang out with preppies.

Grease is story about two teenagers trying to figure out how to be in love, without being rejected by their friends for it. The light film never takes itself too seriously in telling its story, instead focusing on the amazingly talented cast, who exhibit an abundant amount of energy and agility, performing well-choreographed song-and-dance numbers, along with physical humor that would make Charlie Chaplin and John Ritter proud.

Grease is an energetic and exciting homage to the age of cool and rock ‘n’ roll.

Bonus Features
The Rockin’ Rydell Blu-ray edition of Grease contains bonus items found on a previous DVD edition, and are in standard definition. The material includes an introduction to the film by director Randall Kleiser, which sets the stage for the movie to come, followed by an informative audio commentary by the director, along with choreographer Patricia Birch. This commentary was above your average informal text, as Birch gave great insight into how the astonishing dance numbers were crafted, and Kleiser spoke about the joys and challenges encountered while making the film. Next, there’s a Rydell Sing-Along, which allows you to play any or all of the film’s music tracks with the words on screen – it’s Karaoke time, folks. After that is the main commemorative making-of documentary, The Time, the Place, the Motion: Remembering Grease, which includes flashbacks and retrospectives by the cast and crew, on shooting the movie. Then, there’s eleven deleted, extended and alternate scenes.

There is also a thorough series of interview vignettes including: The DVD Launch Party, Grease Memories from John and Olivia, and The Moves Behind the Music, which focuses on choreographer Patricia Birch. For you classic car buffs, there’s a featurette called Thunder Roadsters, focusing on George Barris, known as the King of the Kustomizers, who created the hot rods driven in the movie. Also included are interviews featuring John Travolta, Olivia Newton-John, and producer Robert Stigwood.

The extras are rounded out with four photo galleries, titled Rydell High Year Book, Production, Premiere and Grease Day, along with the Theatrical Trailer.