The classic cat-and-mouse political thriller Three Days of the Condor stars Robert Redford as Joseph Turner, designation (codename) Condor, a bookworm CIA agent, whose New York City division is responsible for reading every book ever published, seeking patterns, codes or hidden messages, that may somehow threaten the security of the United States.

Turner’s laid back nature when it comes to established rules, winds up saving his life, after using a backdoor shortcut to get lunch, helps him inadvertently avoid getting murdered along with his entire unit by a group of professional hitmen, lead by a detached, foreign-sounding mystery man. 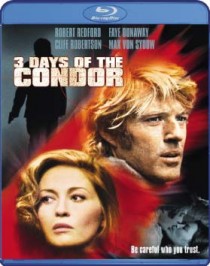 Panicked and unsure what to do, Turner attempts to reach out to his CIA bosses for help, still gravely concerned about who to trust. His hunch turns out to be correct, as his supposed pick-up and rescue meeting place, turns out to be a trap intended to complete the earlier massacre. It also turns out to be the first of many attempts on his life, as the viewer proceeds to go on a roller coaster of conspiracy and action with Turner, as he attempts to avoid getting killed, while searching for the truth behind what happened.

In an effort to remain safe and hidden, and with his own apartment being watched, Turner finds Kathy Hale (Faye Dunaway), irrationally kidnaps her, and forces her to take him to her place for temporary refuge. The dynamic between the two is unmistakable and enjoyable to behold. Turner isn’t a bad guy, but he’s just committed a serious crime to ensure his safety, and after hearing his remarkable story, Hale must decide whether trust him or try to escape and call the police.

As Turner learns the truth about why his section was slaughtered, he comes face-to-face with hired assassin Joubert (Max von Sydow), a modern hitman who has no ideological bent, who’s only concerned with getting paid by the highest bidder. Turner then has to swallow some difficult truths about the cost of keeping America living in the lifestyle it’s become accustomed to.

Every aspect of Three Days of the Condor is simply brilliant, from the steady hand of director Sydney Pollack, to the penetrating acting of Robert Redford and Faye Dunaway, along with powerful supporting efforts by Max von Sydow and Cliff Robertson as shady CIA chief Higgins. The soundtrack by noted jazz musician Dave Grusin, is astonishing, and sets the tone for an involving and exciting ride through the streets of 1970’s New York City, filled with machine-gun toting mailmen, helpful street punks and enough steam to power a train.

My only disappointment with this Blu-ray release is the almost complete lack of special features. Only one exists – the theatrical trailer. However technically, the transfer is very crisp, with a grain to the video that works beautifully with the feel of the city.

Three Days of the Condor is one of the strongest political thrillers released during the 1970s, with questions about our society and its politics that remain relevant today.