For those of you who missed this film in theaters, here’s your opportunity to win a free copy to enjoy. In order to be entered in the random drawing, here’s what you need to do:

I’ll be running this contest through the release date of June 2nd, 2009. Good luck.

More about this release:
Revolutionary Road arrives on DVD and Blu-ray on June 2nd, 2009 from Paramount Home Entertainment. 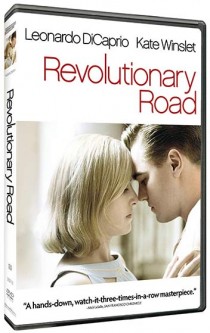 Nominated for three Academy Awards and four Golden Globes, the emotionally gripping film has been called “amazing” (Peter Travers, Rolling Stone), “flawless” (Rex Reed, New York Observer) and a “masterpiece” (Mick LaSalle, San Francisco Chronicle). Directed by Oscar winner Sam Mendes (American Beauty) and adapted from the groundbreaking novel by Richard Yates, Revolutionary Road won Kate Winslet her first Golden Globe for Best Performance by an Actress in a Motion Picture – Drama. Reuniting DiCaprio and Winslet for the first time on screen since Titanic, the incisive portrait of a 1950s American marriage unfolds as an enthralling drama that is moving, thought-provoking and “a revelation” (Clay Smith, The Insider).

The Revolutionary Road DVD and Blu-ray presentations include commentary by director Sam Mendes and screenwriter Justin Haythe, Lives of Quiet Desperation: The Making of Revolutionary Road and deleted scenes. The Blu-ray also includes Richard Yates: The Wages of Truth.