“Never give up, never surrender!”

Kind of ironic that I’m reviewing the new Galaxy Quest DVD, just after watching the newest edition of the franchise it spoofs…in IMAX no less. But while the new Star Trek takes its place among the greatest science fiction epics ever made, Galaxy Quest may be one of the funniest and brilliant sci-fi spoofs ever released.

On May 12th, 2009, Paramount Home Entertainment will release the cult comedy in a brand new Deluxe Edition DVD, with lots of great new bonus features. The cast, including Tim Allen (Wild Hogs), Sigourney Weaver (Baby Mama), Alan Rickman (Sweeney Todd), Tony Shalhoub (Monk), Sam Rockwell (Confessions of a Dangerous Mind), Enrico Colantoni (Just Shoot Me), Daryl Mitchell (Ed) and Justin Long (He’s Just Not That Into You), is just as funny today as they were ten years ago when Galaxy Quest was released in theaters. 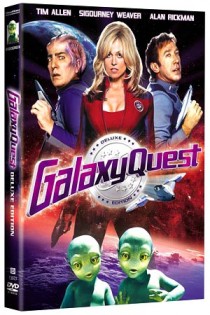 The Galaxy Quest plot follows the cast of a cornball 1980s sci-fi TV show aptly named “Galaxy Quest”. Years after going off the air, the show still has an active following that turn out for yearly cons, dressed in costume and spending hours discussing the show. The cast hasn’t been able to establish themselves outside of their show personas, and are relegated to making personal appearances and schlock commercials. Jason Nesmith (Tim Allen), the show’s former star, hits rock bottom when he overhears fans making fun of him in the men’s room at a convention.

The next morning he’s visited by real aliens, led by Mathesar (Enrico Colantoni), who need his help to save their world from an evil warlord named Sarris (Robin Sachs). So how did they find him, as opposed to some other human subject? They watch show, and believe they are “historical documents” from Earth. They have also recreated a full working model of the ship based on what they’ve seen on the program.

After Jason accepts that this isn’t a hoax or another personal appearance, he convinces the rest of his former crew to join him on his mission.

Galaxy Quest successfully incorporates many of the familiar conventions of Star Trek, as well as the rich fan culture that it inspires, but is also an entertaining sci-fi adventure on its own. Over the course of the movie the cast finds their true character, matching the heroism of their TV alter egos and learn the true meaning of the show’s catch phrase “Never give up, never surrender.”

By Grabthar’s hammer, the intrepid crew of the NSEA Protector is back in our solar system this week.