I didn’t watch Doubt in theaters, however watching the film on Blu-ray for the first time didn’t diminish the riveting effect of such powerful writing and acting representations for me. Doubt was a class in great filmmaking from beginning to end. The performances by Oscar winners Meryl Streep and Philip Seymour Hoffman, as well as Amy Adams and Viola Davis, were resolute, determined and steadfast; part a story defined by the quest for truth and the power and fear of change. 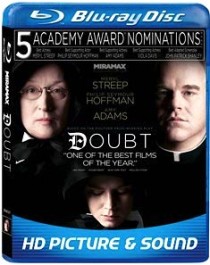 Set in 1964 at St. Nicholas Church and School in the Bronx, with a nation still deeply scarred from the assassination of President John F. Kennedy the year prior, Father Brendan Flynn’s (Philip Seymour Hoffman) progressive views and charismatic presence have won him the respect and admiration of his congregation. At the parish school, principal Sister Aloysius Beauvier (Meryl Streep) keeps her students in line with old-fashioned fire and brimstone, along with healthy a dose of fear. When young Sister James (Amy Adams) shares with Sister Aloysius her concern that that Father Flynn has “taken an interest” in twelve-year-old Donald Miller (Joseph Foster), the school’s first African-American student, the older nun immediately launches an investigation that on the surface seems more like a smear campaign against the young priest and his newfangled ideas. Determined to protect every one of her charges, Sister Aloysius attempts to use the evidence she discovers to have Flynn removed from the school. John Patrick Shanley’s finely layered script takes audiences through a spectrum of emotions, asking if any decision is ever free from doubt.

Meryl Streep becomes Sister Beauvier, believably cold and menacing, with a glaze on her face that looked more like a chilled corpse than a warm and loving nun. She also adopted a convincing working class New York accent that backed up her school-of-hard-knocks superiority.

Philip Seymour Hoffman matches Streep’s presence and authority extremely well, as the likable Father Flynn. Flynn is engaging and powerful on the pulpit, and charismatic in everyday settings, but strong enough to stare down even the stark and thewy Aloysius. He’s unassuming and kind, yet there’s something just odd enough about him to suspect that something might not be right.

Amy Adams’ Sister James acts as the viewers eyes and ears, as she sees the incendiary situation from both sides. She’s forced to hear both Sister Beauvier’s and Father Flynn’s points of view at length, and straddles the line between the two brilliantly.

Viola Davis only appears in the movie briefly as the mother of the boy at the center of the controversy, but her conversation with Sister Aloysius as they walk through a park, is one of the most powerful scenes in Doubt, and it clarifies the racial aspects of the conflict and uncovers how important the time factor plays. It also leads to new revelations about the character of Sister Aloysius. That discussion is where we first see the cracks in Sister Aloysius’ armor, thanks in part to a steady and penetrating performance by Davis.

Doubt is a brilliant piece of filmmaking, that took its place among the best dramas to hit the screen, the day it was released in theaters.

Below are some exclusive clips from the Blu-ray and DVD releases.

Behind the Scenes: Cast Choices

Behind the Scenes: Sisters of Charity