Who would swing off a six-story building for a homemade Spider-Man movie? Why would newlyweds with a baby spend $20,000 on a Star Wars film from which they can never profit? How did three nobodies blow Steven Spielberg’s mind with an Indiana Jones flick they made as teens in the Eighties? – Excerpt from Homemade Hollywood

I rarely get requests to review books, but when they’re sent to me, I do my best to give them as much attention as I can – especially when those texts are completely inline with the goals of this website.

Homemade Hollywood: Fans Behind The Camera follows the gorilla filmmaking movement, which has spread exponentially with the rise of online video sharing websites like YouTube and Vimeo. The book is packed with insightful interviews and stories of everyday people who are grabbing their family camcorders, personal computers and close friends, but leaving majority opinion and – in some cases, common sense – at home, driven by a passion to create the films they feel in their gut fans really want to watch.

This underground revolution apparently began sometime in 1926, when a pair of would-be filmmakers, made an amateur Our Gang movie, based on the popular Hal Roach Studios series that gave birth to Buckwheat, Alfalfa, Spanky and the rest of the crew. Since then, most every major pop culture character, from Batman to Captain Kirk to Harry Potter, have found their way into a fan film of one kind or another. 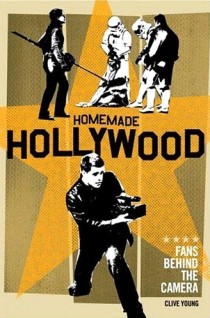 The entertaining book contains pop culture history, along with an exploration of Corporate Media’s changing attitude towards its audience. Filmmakers Sandy Collora (Batman:Dead End) and Eli Roth (Hostel, Cabin Fever), along with punk icon Tommy Ramone, fandom scholar Henry Jenkins and many others discuss their roles within the lexicon of this unique art form, and the foreword by FilmThreat.com founder Chris Gore (G4 TV’s Attack of the Show) sets a light, but passionately thorough tone for the text that follows.

There are also fascinating story arcs within the book, including how these infectiously enthusiastic filmmakers attract established professionals to their productions; for example four-time Mr. Universe Michael O’Hearn, who agreed to play Superman in Collora’s World’s Finest. Also absorbing is how major studios have done more than simply attempt to smother the creative spirit of these “true fans”, and have even sought their counsel for navigating the sometimes controversial waters that copyright and intellectual property dictate; like when Warner Bros. sought the advice of fan filmmaker Aaron Schoenke (Batman Beyond: Year One, Patient J), on how to handle the wave of fan films featuring its iconic characters.

Homemade Hollywood offers something for everyone. Whether you’re looking from some inspiration for your own planned fan filmmaking adventure, have dreams of knocking on Hollywood’s rear door, or you’re seeking an insightful history lesson on this purely grassroots movement, this book delivers. It’s a thoroughly entertaining and impassioned read that I think should be required reading for teenagers who claim there’s absolutely nothing cool to do in their cities and towns. I’d much rather have my son creating cinematic web gems, than vegging out on video games. It’s written for anyone with an obsession for the popular film medium, who might need a little emotional validation and credibility for their fervent pass-time, and will certainly be an enjoyable tome for everyone else.

About the Author
Clive Young is an author and lecturer covering the crossroads between high tech and popular culture. He is senior editor for Pro Sound News and has written for MTV, VH1.com, American Songwriter among others. Young is also the author of Crank It Up, an exploration into the world of rock concert roadies. Young has lectured extensively on film and music at many universities, libraries and conventions. The author lives in New York with his wife and daughter.