I don’t think a crime film will ever be released, that’s grittier and better-made than William Friedkin’s original The French Connection – even John Frankenheimer’s very worthy 1975 follow-up, French Connection II. The first film was based on actual people and events, however French Connection II was entirely fictitious, and didn’t bring back any of the original’s supporting characters, as the action moves overseas to the main villain’s home turf – France. The only returning cast members are Hackman and Fernando Rey. 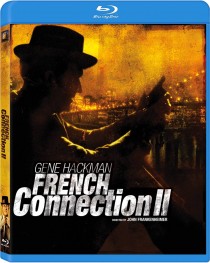 A few years have passed since drug smuggler Alain Charnier (Rey) barely escaped arrest in the first film. “Popeye” Doyle (Hackman), intent on capturing the fugitive and bringing him to justice, flies to Marseilles, where he gets to work with the local authorities led by Barthélémy (Bernard Fresson). Barthélémy isn’t enthusiastic about working with an American cop as “persistent” as Doyle, and finds Doyle’s stubborn behavior to be disruptive to his work.

One of the most powerful and probably controversial acting segment of the film is devoted to our hero cop being kidnapped by Charnier’s men, beaten, and turned into a heroin junkie. Frankenheimer’s steady and unique direction handles the critical turn of events very well, and soon Doyle is back on track and even more determined to nab Charnier. When he’s finally kicked the habit of the drug he’s been fighting to get off the streets, he’s angrier than ever, with his first order of business being to burn down a whole building.

Frankenheimer creates a sequel that is as close in quality as any movie could be to the first, and marches to a completely different drummer. Instead of gritty investigation and watching Doyle and his swagger nail crooks to the wall, the director paints a fish-out-of-water tale that forces the tough-as-nails cop to use more than bravado to get his man.

Extra Features
Extra features on the disc include director and cast commentaries, which are from an earlier DVD release. One of the new features on this Blu-ray is a featurette called Frankenheimer in Focus, which is a tribute to the late director’s career. I really enjoyed this, as it spanned his entire career, which includes some of the best action thrillers ever lensed, including Birdman of Alcatraz, Black Sunday and The Manchurian Candidate, as well as solid contemporary films like Ronin. A Conversation with Gene Hackman, is the other major new material on the disc, and that featurette includes a video interview with the actor.

The release also features an Isolated Score audio track, just like in the first movie’s release. The special features are rounded out with D-Box motion control and an HD stills gallery.

French Connection II looks very good on Blu-ray. Most of the grain has been removed, and the movie is presented in a 1080p HD transfer with its original 1.85:1 aspect ratio. Audio choices range from a newly-mixed English 5.1 DTS-HD Master Audio track, to the original mono tracks, which are available in English, French, and Spanish. Subtitles are in English (SDH), Spanish, Cantonese and Mandarin.