On March 31st, Twentieth Century Fox Home Entertainment will release the breakout hit Marley & Me, on Blu-ray and DVD. Fox has decided to provide FilmFetish.com with three copies of the DVD Edition for readers to enjoy.

In order to be entered in the random drawing for this instant classic, here’s what you need to do:

I’ll be running this contest through the release date of March 31st. Good Luck!

More on Marley & Me
From the director of the Devil Wears Prada and based on the New York Times best-selling novel from John Grogan, Marley & Me leaps onto three-disc Blu-ray, two-disc Special Edition and Single Disc DVD March 31 from Twentieth Century Fox Home Entertainment. Featuring an incredible A-list cast, Oscar-nominee Owen Wilson (Night at the Museum) and Emmy winner Jennifer Aniston (The Break-Up) star in a hilarious tail about a family who learns important life lessons from their adorable, but naughty and neurotic dog. 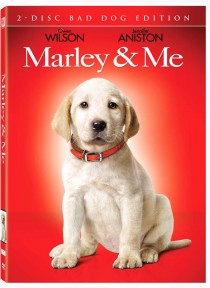 When newlyweds John and Jenny Grogan (Wilson and Aniston) leave the snow of Michigan for the beaches of Miami, they decide to adopt a yellow Labrador retriever named Marley, in order to give them a taste of parenthood. However, things get ruff when the adorable 12-pound puppy transforms into a highly-strung, boisterous and uncontrollable 100-pound steamroller of unbridled energy that always finds trouble. From flunking obedience school, chewing off dry wall, taking a bite out of the sofa, stealing a Thanksgiving turkey and chasing the UPS guy, Marley causes absolute chaos. Despite the mayhem he generates over the years, Marley sees the Grogans through the ups and downs of life and the countless challenges that come with it. The family soon discovers that Marley, “the world’s worst dog,” somehow brings out the best in them.

Featuring love and fun for the whole family, Marley & Me will be available in three DVD configurations including Fox’s first ever three-disc Blu-ray release.

The Marley & Me Bad Boy Three-Disc Blu-ray offers families the opportunity to enjoy the film on three different formats: high definition Blu-ray Disc featuring an exclusive Dog Training Trivia Track and 101 tutorial with BonusView, Digital Copy for playback on portable devices and a single-disc DVD for use on existing standard DVD players.

Visit the official website for Marley and Me at www.marleyandmemovie.com.