On Tuesday March 10, 2009, Paramount Home Entertainment will release Primal Fear: The Hard Evidence Edition on DVD and Blu-ray. This classic legal thriller is filled with amazing talent including Edward Norton (Fight Club, The Incredible Hulk), Richard Gere (Chicago), Laura Linney (The Savages) and many more. The deluxe release is packed with special features including a new interview with Edward Norton and commentary by director Gregory Hoblit.

To celebrate the release, Paramount is releasing two copies of the DVD edition for FilmFetish.com readers to enjoy.

I’ll be running this contest through March 10, 2009 – the release date of the new special editions. Good luck!

More about the release
A high-profile slaying becomes the case of an ambitious attorney’s career in this legal thriller based on the novel by William Diehl. Richard Gere stars as Martin Vail, a famed defense lawyer who volunteers his services to Aaron Stampler (Edward Norton), a Kentucky teenager charged with the murder of a Chicago archbishop. 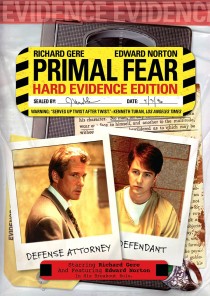 Covered with blood, Aaron was captured after a foot chase broadcast live on TV, making a gleeful Vail certain that he could raise his profile by defending the obviously guilty suspect. Assigned to prosecute is Assistant District Attorney Janet Venable (Laura Linney), who is Vail’s ex-girlfriend. Vail’s case becomes more complicated than he expected when a psychologist, Dr. Molly Arrington (Frances McDormand) concludes that Stampler suffers from multiple personality disorder.

Vail also uncovers evidence that the archbishop was involved in a corrupt land scheme and may have molested young parishioners. Now the cynical, opportunistic attorney is faced with a daunting prospect, a client who may actually deserve his best defense. Its shocking, twist ending made Primal Fear a big box office hit and earned Norton, in his screen debut, an Oscar nomination for Best Supporting Actor.