Spine-tingling horror gets a triple play, as Paramount Home Entertainment releases Friday the 13th Part 3 the Deluxe Edition on DVD – in 3D – for the first time in the U.S. While the third in the series of Jason movies starts to show it’s cracks, it’s still reminiscent of a time when slasher films were a fun diversion to explore with friends on a Saturday night.

Part Three is also a significant film in the evolution of the series in two ways:

As with all of the early Friday the 13th movies, there’s some unique kills that occur, making the film more than just watchable, but enjoyable in a twisted sorta way. 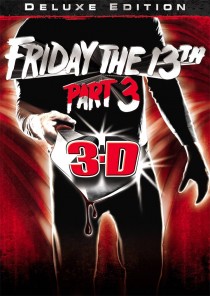 The storyline of part 3 is typical – another group of naive counselors choose to ignore Camp Crystal Lake’s gruesome legacy. Then find themselves in a bloody game of cat-and-mouse with the maniacal Jason who stalks their every move, and ruthlessly offs them off one-by-one, in creative ways actually – at least creative for a maniac killer. Jason also goes postal on a motorcycle gang that dares to cause trouble for the same counselors he’s trying to dismember.

The disc marks the first time this blood-splattered romp in the woods can be watched in all its gory 3-D splendor on DVD. It also comes with 2 pairs of 3-D glasses to ensure an optimal viewing experience, plus includes a 2-D version of the film as well. My eyes had some issues watching the 3-D version, so I switched about half-way through to the 2-D presentational. So it was nice having the option.

However, other than the original theatrical trailer and the cool 3-D glasses, the disc is devoid of extras, so it makes sense to purchase this version in conjunction with Parts One and Two, which have heaping portions of extras for fans to enjoy.