On February 3rd 2009, Paramount will release cult comedy classic, The Naked Gun: From the Files of Police Squad!, as part of the I Love the 80’s DVD series of film releases. The Naked Gun spurred to sequels and started an entirely new form of movie parody. To celebrate the release, FilmFetish.com has gotten our hands on 2 copies of the Special Edition DVDs to give away to readers. There’s some fun extras on all of these special releases, including a bonus CD containing songs by some of the era’s top recording artists. 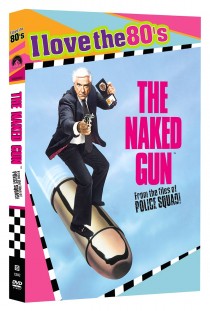 The unique decade that was the 1980s. The music, the fashion, but especially the movies. Paramount and VH1 celebrate the best films of the decade in the second wave of the I Love the 80’s Collection. From Academy Award-winning dramas Ordinary People, An Officer and a Gentleman and The Accused, to the inspired hilarity of The Naked Gun: From The Files of Police Squad, Top Secret and Cheech & Chong Still Smokin’. Thirty of the most memorable motion pictures released between 1980 and 1989 are available nationwide on DVD on February 3, 2009—accompanied by a special bonus CD containing songs by some of the era’s top recording artists.

The second installation in the I Love the ‘80s film series gives preppies, punks and everyone else who loved the ‘80s a chance to take home a little bit of fun pop culture history. This unique collaboration between Paramount Home Entertainment and VH1 debuted in August 2008 with 40 of the decade’s outstanding films. In addition to the bonus CD, the promotion offers consumers two free music downloads with the DVD purchase (while supplies last) giving you even more opportunity to relive the 80’s.

Anyone who’s gotten hooked on VH1’s TV show I Love the ‘80s, with its vivid flashbacks of the decade’s people, pop culture, fashions and fads, will find plenty to love in the I Love the ‘80s DVD series.

To get your chance to be in the random drawing for one of the Naked Gun DVD prizes, here’s what you need to do:

More about this release

Synopsis
Those screw-loose Airplane! creators have done it again! Leslie Nielsen stars as Police Squad’s own granite-jawed, rock-brained cop Frank Drebin, who bumbles across a mind-control scheme to assassinate Queen Elizabeth. Priscilla Presley, O.J. Simpson, a stuffed beaver, two baseball teams and an odd assortment of others join the wacko goings-on and blow the laugh-o-meter to smithereens.

Below is a trailer for The Naked Gun: From the Files of Police Squad!