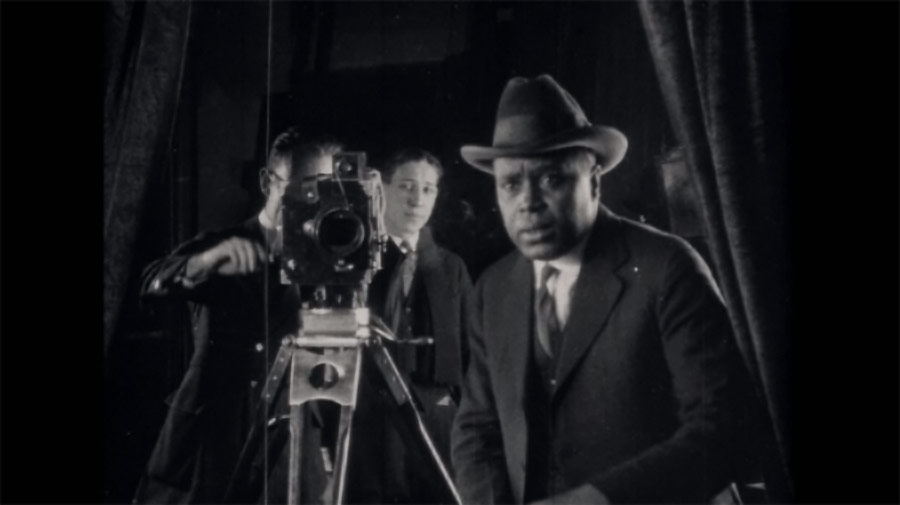 Among the most fascinating chapters of film history is that of the so-called “race films” that flourished in the 1920s through the 40s. Unlike the “black cast” films produced within the Hollywood studio (such as Stormy Weather or Green Pastures), these films not only starred African Americans but were funded, written, produced, directed, distributed, and often exhibited by people of color. Entrepreneurial filmmakers not only built an industry apart from the Hollywood establishment, they cultivated visual and narrative styles that were uniquely their own.

Defying convention and operating outside the studio system, these filmmakers were the forefathers of the French New Wave, the L.A. Rebellion, and the entirety of American indie cinema. Previously circulated in poor-quality 16mm prints, these newly restored versions allow film fans to witness the legacies of Oscar Micheaux, Spencer Williams, and James & Eloyce Gist with fresh eyes – proving that, anything but imitative, these Pioneers of African-American Cinema were purely innovative.

This set contains an extensive collection of films, showcasing nearly 20 hours of material, representing a broad diversity of filmmaking styles and subject matter. Presented in cooperation with major U.S. and international film archives, each film has been digitally restored and is accompanied by a series of videotaped interviews with influential historians and archivists, as well as an 80-page booklet featuring essays and notes. Pioneers of African-American Cinema will become available on Blu-ray and DVD on July 26th.

Funded by a successful Kickstarter campaign launched by Kino Lorber last year, the project quickly exceeded its original goal by a significant amount, allowing for the expansion of additional content to be included in the final box set. Executive Producer Paul D. Miller and Producer Bret Wood, working with series curators Charles Musser and Jacqueline Najuma Stewart and the cooperation of leading film archives all around the world, assembled almost twenty hours of material, including 16 feature-length films, plus short films, fragments and trailers, for the final collection. The result is the most comprehensive collection of so-called “race movies” yet released, carefully restored from the best surviving archival elements, and many of which are available on home video here for the first time, finally allowing audiences to experience this rich but long-neglected chapter of film history.

Included in the collection are such landmark films as Oscar Micheaux’s Within Our Gates (1920), the earliest surviving feature film directed by an African American; Body and Soul (1925), starring Paul Robeson in his film debut; and The Blood of Jesus (1941, added to the National Film Registry in 1991), written, directed by and starring Spencer Williams. Also included are lesser-known but equally significant films such as Hell-Bound Train (1930), by evangelist husband-and-wife team James and Eloyce Gist; The Flying Ace (1926), directed by Richard E. Norman, one of several white filmmakers who helped to break racial boundaries by producing films starring African Americans in leading roles; and The Bronze Buckaroo (1939), a black-cast Western that shows a side of the race movie dedicated to pure entertainment.

Other film rarities in the collection include the recently-rediscovered Hot Biskits (1931), the earliest known film directed by Spencer Williams; Oscar Micheaux’s outrageous satirical short The Darktown Revue (1931); the only known surviving footage from By Right of Birth (1921), produced by the Lincoln Motion Picture Company, the first studio founded and operated entirely by black filmmakers; and excerpts from the ethnographic films made by Zora Neale Hurston.

Bonus material includes introductions to selected films and filmmakers featured in the set, a 1985 promotional film with Ossie Davis, S. Torriano Berry discussing the restorations of films by James and Eloyce Gist, and rare trailers for Micheaux’s Veiled Aristocrats (1932) and Birthright (1938).

The silent films have been provided with scores in a wide range of musical styles, meant to reflect the diversity of the films themselves, including traditional orchestral accompaniment (The Flying Ace, Mont Alto Motion Picture Orchestra), traditional jazz combo (Ten Nights in a Bar Room, composed by Donald Sosin), improvisational jazz combo (Body and Soul and Within Our Gates, music by Paul D. Miller, aka DJ Spooky), improvisational jazz solo (The Symbol of the Unconquered, music by drummer Max Roach), traditional keyboard (The Scar of Shame, music by Makia Matsumura), and scores that blend the traditional with the conceptual (Hell-Bound Train, music by Samuel D. Waymon, Eleven P.M., guitar score by Rob Gal; Mercy, the Mummy Mumbled, music by Alloy Orchestra).

The collection is curated by Yale University’s Charles Musser and the University of Chicago’s Jacqueline Najuma Stewart. The series is Executive Produced by Paul D. Miller, aka DJ Spooky and Produced by Bret Wood.

Pioneers of African-American Cinema will be released on Blu-ray and DVD July 26th, 2016.

Below is a list of the complete contents of the Pioneers of African-American Cinema Collection.