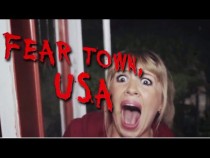 The screening will be held at 11 PM at Brooklyn’s Videology, located at 309 Bedford Ave. in Williamsburg, Brooklyn. Videology has been a longtime supporter and host to Troma Films. Admission is free to the public. Fear Town, USA is also available for commercial-free and uncensored streaming on Troma’s new subscription video-on-demand channel, Troma Now.

On St. Blevins Day (the most debauched of regional holidays), four boys looking to lose their virginity, a girl haunted by a dark secret, a lonely teenager, and an escaped mental patient all meet at a party in the woods. They were looking for fun but what they found . . . was FUCKING TERROR!

Find out more about this screening at videologybarandcinema.com/events/fear-town-usa.