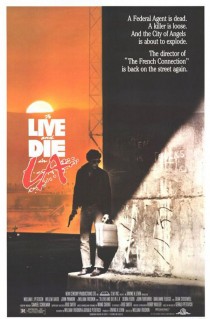 Deadline has reported that 1985 cult classic crime thriller To Live And Die In L.A., the MGM film written and directed by William Friedkin, is currently being adapted for television by cable network WGN America. The network apparently landed the series adaptation of the action thriller, with Oscar winner Friedkin himself directing and executive producing. Friedkin worked on the adaptation with fellow Oscar winner Bobby Moresco (Crash). The project hails from MGM Television, the shingle also responsible for the TV adaptation of Fargo. If Fargo is any indication, viewers could be in for another gripping, high-quality action drama series. To Live And Die In L.A. has received a script-to-series commitment and is expected to go straight to series upon approval, according to the report.

The original To Live And Die In L.A., considered by Film Fetish a Cult Cinema Icon, starred William Petersen, Willem Dafoe, John Pankow, Jane Leeves, John Turturro, late martial artist & actor Steve James and Dean Stockwell. It, along with the upcoming adaptation, was based on a novel by former U.S. Secret Service agent Gerald Petievich, centering on a fearless Secret Service agent driven to bring down a counterfeiter (originally Willem Dafoe) who killed his partner. The series is described as an intense immersion into the inner workings of the Secret Service and a cat-and-mouse chase through the dark underbelly of Los Angeles.

Friedkin’s attachment to the project adds lots of weight. His credits include The French Connection, for which he won an Oscar, as well as The Exorcist and Rules Of Engagement.

Check out the trailer for the 1985 original To Live And Die In L.A.

William Friedkin directs To Live and Die in L.A. in a rare behind-the-scenes featurette.