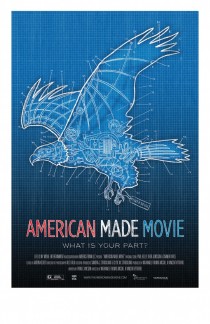 The documentary American Made Movie looks at the devastating effects the decline of manufacturing has had on communities and families across the United States. Filmmakers Vincent Vittorio and Nathaniel Thomas McGil interviewed dozens of economists, business leaders, consumers, politicians and local historians in order to paint a picture of the manufacturing industries roots and current condition in America, while providing some much-needed insight into ways the tide can be shifted.

American Made Movie is an eye-opening and thorough examination, filled with smart interviews, gorgeous cinematography, and exhaustive data to support its findings. What I enjoyed most about the film is that it didn’t over-agonize about where we are today, instead finding points of light and grabbing on to them.

Detroit is presented as an example of the catastrophic affect the loss of manufacturing has had on families and communities. Cinematographer Alexander Falk’s sweeping shots of former car factories, both inside and out, highlight such incredible decay. Roofs of long abandoned buildings drip water into paint buckets placed inside cavernous empty halls, symbolizing time ticking away on local economies. Metro Detroit AFL-CIO President Chris Michalakis discusses Detroit’s storied automobile and steel manufacturing history, and how the many thousands of jobs generated entire towns. He goes on to talk about how employers have struggled to compete in the global economy, moving operations overseas and slashing work forces at home. Former U.S. Comptroller & Comeback America Initiative Founder Dave M. Walker drives the point home, discussing how unbalanced trade agreements have pitted American companies against entire foreign governments at times – governments that have endless financial resources.

Mark Andol, owner of General Welding & Fabricating and Merrie Buchsbaum, a self-taught polymer artist who started the company Merrily Made, relay surprising stories of hope and, ultimately, success, as they discuss how they re-invented their business models to accommodate the changing landscape.

McGill and Vittorio’s film argues convincingly about the positive impact of domestic manufacturing jobs on local economies, even in the face of great challenges. Among the many graphically presented statistics animated on-screen, one that stuck out in my mind was that “the United States has the worst trade imbalance in the world.” This fact is made more dire when you consider the many recent defaults and economic catastrophes so many countries have been facing around the globe. If their economies collapsed under the pressure, how can the U.S. continue under the current system.

According to its website, American Made Movie has reached 22 million people through the press while promoting its 2013 theatrical release and 32 city-32 day bus tour. The tour focused on the impact that consumers have on the health of their local communities, along with the nation at large. The tour also informed communities of the issues at hand as well as illustrated the opportunity for every citizen to be a part of making a change for the better.

American Made Movie is currently available On-Demand and will be on DVD May 20th, 2014.

Learn more about American Made Movie and its impact on U.S. sentiment towards manufacturing and the communities affected by its rebirth, at theamericanmademovie.com.