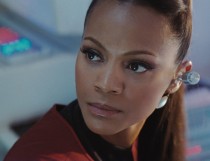 Zoe Saldana has contracted to star in NBC’s four-hour miniseries Rosemary’s Baby, Variety reports. Saldana will play Rosemary, the iconic young wife and soon-to-be mother who moves into a Paris apartment with her husband, unaware of its dark and storied past. After becoming pregnant, Rosemary becomes increasingly suspicious that both her husband and their strange neighbors have hidden motives regarding the future of her child.

According to reports, NBC announced the Rosemary’s Baby remake/miniseries in December, with Lionsgate TV attached to produce the project. The event film is based on Ira Levin’s 1967 horror novel and is being penned by Scott Abbott and James Wong. The book was originally adapted into a 1968 film directed by Roman Polanski, which starred Mia Farrow as Rosemary, along with John Cassavetes as her husband

Saldana, who will also act as an executive producer for Rosemary’s Baby, recently appeared in the critically acclaimed Out of the Furnace, and will play Gamora in Marvel’s upcoming superhero sic-fi adventure Guardians of the Galaxy, due in theaters next summer. She’ll also return to the role of Neytiri for James Cameron’s Avatar 2, due in December of 2016.