The universally praised suspense drama Ain’t Them Bodies Saints has just been released by IFC Entertainment on Blu-ray and double-disc DVD. Academy Award nominees Rooney Mara (The Girl With the Dragon Tattoo, Side Effects, Her) and Casey Affleck (The Killer Inside Me, Gone Baby Gone, The Assassination of Jesse James by the Coward Robert Ford) star as doomed lovers separated by prison bars and miles of desert wasteland in a film being described as a moody collision of love and crime in the tradition of Bonnie and Clyde.

“LIKE” this posting using the Facebook button above the text ON THIS PAGE, PLUS make sure you’ve “LIKED” our Facebook page at Facebook.com/filmfetish. Lastly, post the following on our Facebook Timeline: “I just entered the the Ain’t Them Bodies Saints Blu-ray Contest @filmfetish #filmfetish.” Your entries will not be accepted if you do not follow these instructions and please note that we check profiles to assure fairness. So please do not create multiple profiles or “contest” profiles in order to enter.

More about Ain’t Them Bodies Saints

Academy Award nominees Rooney Mara (The Girl With the Dragon Tattoo, Side Effects, Her) and Casey Affleck (The Killer Inside Me, Gone Baby Gone, The Assassination of Jesse James by the Coward Robert Ford) star as doomed lovers separated by prison bars and miles of desert wasteland in Ain’t Them Bodies Saints, a moody collision of love and crime in the tradition of Bonnie and Clyde.

Four years ago, impassioned young outlaw couple Bob Muldoon (Affleck) and Ruth Guthrie (Mara) were apprehended in the Texas hills during a shootout that left a local officer wounded by a bullet from Ruth’s gun. Taking the blame, Bob was sentenced to 25 years in prison. After having engineered a daring escape, Bob is now determined to reconnect with the love of his life and meet the daughter who was born while he was incarcerated. But the journey back won’t be easy, and the powers that be threaten to keep the two lovers apart forever.

Co-starring Ben Foster (Kill Your Darlings, The Messenger) and Keith Carradine (Nashville, Cowboys & Aliens) and set against the gritty landscape of 1970s Texas Hill Country, Ain’t Them Bodies Saints is a breathtaking and exquisitely photographed meditation on the fragility and transience of love.

The acclaimed IFC Films theatrical release was an Official Selection at the Sundance Film Festival, where it won the Cinematography Award, and was selected for the prestigious International Critics’ Week at the 2013 Cannes Festival.

Miami Herald film critic Rene Rodriguez said director David Lowery (St. Nick) “has a lyrical style of storytelling that is delicate and subtle yet suffused with emotion and atmosphere. It’s gentle and pointed at the same time.” Slash Film’s Russ Fischer called Ain’t Them Bodies Saints “an exceptional modern Western.” The film “gets under your skin and stays there,” said Cath Clarke of Time Out London. Stephen Rea of the Philadelphia Inquirer praised it as “a loping and lovely romance, steeped in tragedy, with a Texas twang.” “A wistful and wayward drama about an outlaw couple who will get under your skin and work on your heart if you’re not careful,” wrote Betsy Sharkey of the Los Angeles Times.

In a extraordinary review at Salon.com, Andrew O’Hehir wrote: “Visually ravishing, tonally commanding and built around magnetic performances by Rooney Mara and Casey Affleck as Bonnie-and-Clyde doomed lovers, Ain’t Them Bodies Saints is a tragic but not despairing tale of fatal romance … It marks the arrival of an immense talent.” 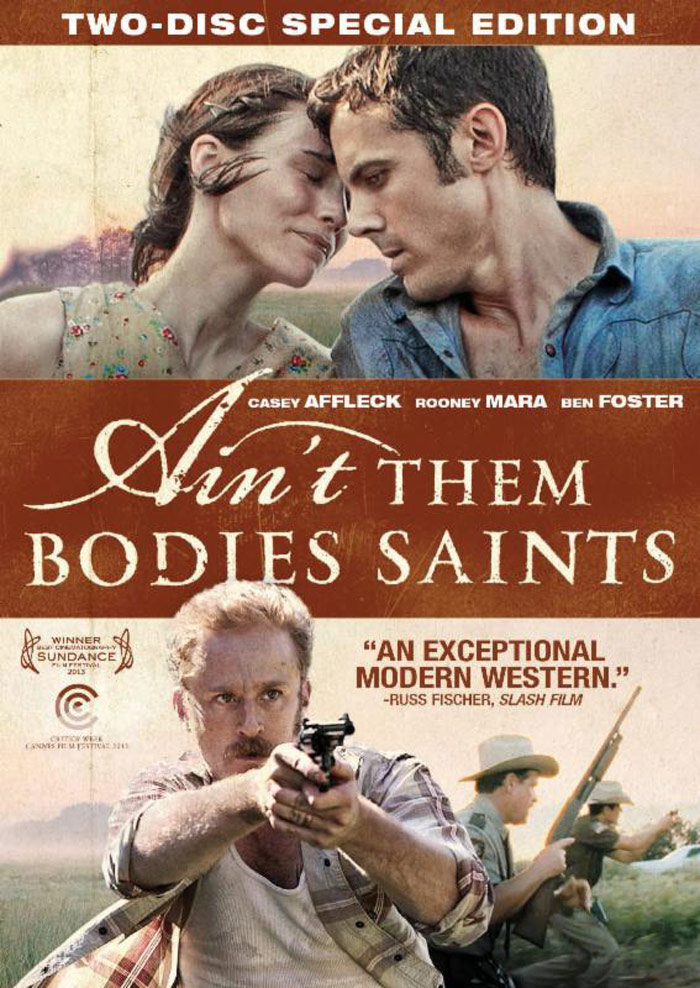