On September 24th, IFC Midnight will release the wry and provocative documentary Room 237 on Blu-ray and double-disc DVD. The film centers on Stanley Kubrick’s landmark modern horror The Shining. On the same day that Room 237 comes to home video, Stephen King will publish Doctor Sleep, a sequel to The Shining. In the new novel, Danny Torrance, the child who escaped his violently insane father at the end of the original book, is now a middle-aged New Englander whose psychic gift of “shining” provides comfort to the dying patients in a nursing home.

To celebrate the release of Room 237 and the new book, Film Fetish is giving away two copies of the Blu-ray edition to readers.

In order to have a chance to win a free copy of Room 237 on Blu-ray:

“LIKE” this posting using the Facebook button above the text ON THIS PAGE, PLUS make sure you’ve “LIKED” our Facebook page at Facebook.com/filmfetish. Lastly, post the names of your 3 favorite Stanley Kubrick movies on our Facebook Timeline and make sure to mention “I just entered the Room 237 Blu-ray Contest @filmfetish #filmfetish” in your post. Your entries will not be accepted if you do not follow these instructions and please note that we check profiles to assure fairness. So please do not create multiple profiles or “contest” profiles in order to enter.

In 1980, Stanley Kubrick, who had earlier created landmarks in the genres of black comedy (Dr. Strangelove) and science fiction (2001: A Space Odyssey), released his masterpiece of modern horror, The Shining. Over 30 years later we’re still struggling to unearth its hidden meanings. Rodney Ascher’s wry and provocative documentary ROOM 237 fuses fact, fiction and speculation through interviews with both fervent fans of the film and scholars, creating a kaleidoscopic deconstruction of Kubrick’s controversial classic. It comes to Blu-ray and double-disc DVD from IFC Midnight on September 24, 2013.

Many movies lend themselves to wide-ranging interpretations, but few as rich and mysterious as The Shining, Stanley Kubrick’s adaptation of Stephen King’s bestselling novel. In Rodney Ascher’s ROOM 237, we hear from people who have developed complex theories about the film and believe they have decoded the hidden symbols and messages buried in the late director’s unforgettable shocker, in which a family man (played by Jack Nicholson) descends into madness while serving as the off-season caretaker of a deserted old hotel. The Shining received mixed reviews upon its initial release, but over the decades its stature has only grown, with Steven Spielberg and Martin Scorsese ranking it among the greatest horror films ever made.

Carefully examining The Shining inside and out, and forwards and backwards, ROOM 237 is equal parts captivating, provocative and pure pleasure. It gives voice to the fans and scholars who espouse these theories, reworking Kubrick’s film to match their ideas and intercutting it with layers of dreamlike imagery to illustrate their streams of consciousness. Sometimes outrageous, always engaging, the words of the interviewees are given full force by Ascher’s compelling vision.

An Official Selection at the 2012 Sundance, Cannes and Toronto film festivals, and winner of the Best Director prize at Fantastic Fest, ROOM 237 received a theatrical release by IFC Films in top markets and earned glowing reviews.

“Part of what makes ROOM 237 fascinating to watch and think about (beyond other people’s loopiness) is that it shows how works of art become encrusted with their reception,” wrote Manohla Dargis of The New York Times. “It works like a Kubrickian Da Vinci Code, and it lures you into seeing The Shining as a kind of feature-length Zapruder film,” said Owen Gleiberman in Entertainment Weekly. The Boston Globe’s Ty Burr said, “It’s about the human need for stuff to make sense – especially overpowering emotional experiences – and the tendency for some people to take that sense-making to extremes.”

“[It] may be the surpassingly eccentric – and enormously entertaining – film that Kubrick deserves,” wrote Joe Morgenstern of The Wall Street Journal. NPR’s Scott Tobias called the film “a thrilling testament to the fact that art is – and should be – open to interpretation.” Newsday’s John Anderson said, “There’s enough real evidence supporting the theory that Kubrick was a genius, and that’s pretty entertaining all by itself.” And The San Francisco Examiner’s Jeffrey M. Anderson summed up: “ROOM 237 could become an essential companion piece to The Shining from now on. For those who see both, it will be impossible to think about one without the other.”

On September 24, the same day that ROOM 237 arrives on Blu-ray and two-disc DVD, Stephen King will publish Doctor Sleep, a sequel to The Shining. In the new novel, Danny Torrance, the child who escaped his violently insane father at the end of the original book, is now a middle-aged New Englander whose psychic gift of “shining” provides comfort to the dying patients in a nursing home. 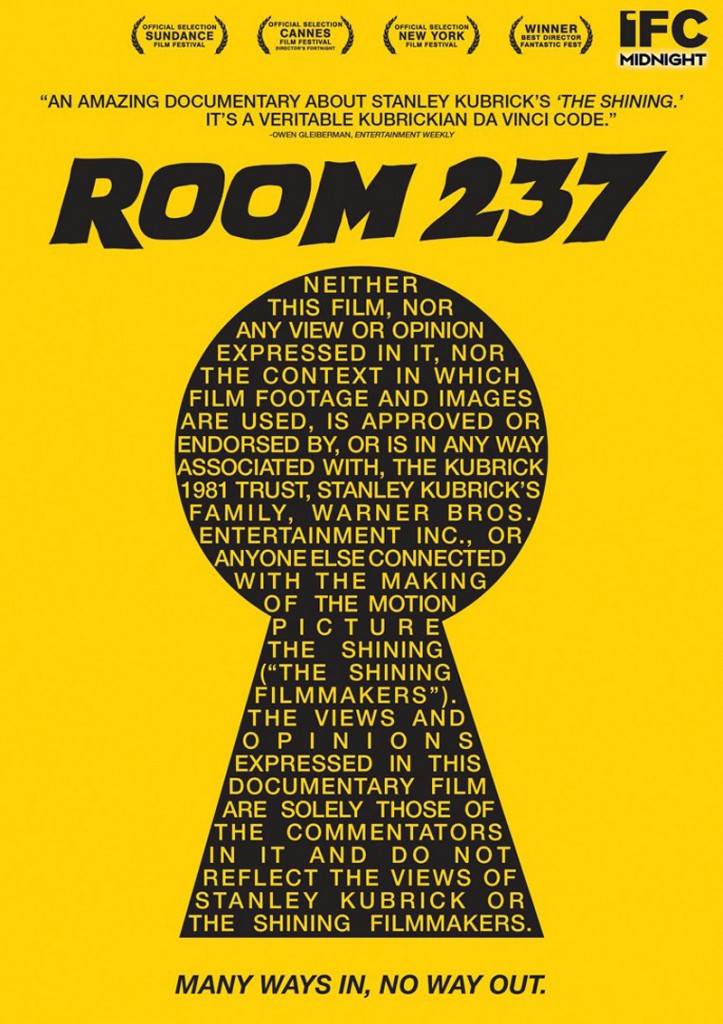