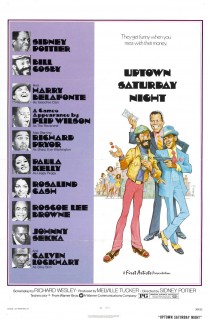 Studio System News reports that Jeff Shakoor has been tapped to rewrite the script for Will Smith’s upcoming remake of the cult classic Blaxploitation comedy Uptown Saturday Night, which Warner Bros. and Smith’s Overbrook Entertainment plan to release in 2014. Will Smith, James Lassiter, Ken Stovitz and Jada Pinkett Smith will produce Uptown Saturday Night, which begins the morning after two estranged friends have their wallets stolen at a nightclub. The two men soon learn that one of their wallets contained a winning lottery ticket and they set out to find the wallet by any means available.

According to the report, Adam McKay is set to direct the remake, which David Dobkin was previously attached to helm. Timothy Dowling, Don D. Scott, Mark Cullen and Robb Cullen penned previous versions of the script, however the project is apparently picking up steam with new writer Shakoor on board.

When Uptown Saturday Night was first put into development, Warner Bros. attempted to team Will Smith with Denzel Washington (they would have filled the shoes originally worn by Sidney Poitier with Bill Cosby) but couldn’t make the scheduling work.

Uptown Saturday Night was originally released in 1974 and directed by it’s co-star Sidney Poitier. Two more comedies continued the on-screen partnership of Sidney Poitier with Bill Cosby, Let’s Do It Again (1975) and A Piece of the Action (1977), although they weren’t technically sequels. There was also a television film named Uptown Saturday Night, that was released in 1979. That film starred Cleavon Little and Adam Wade.