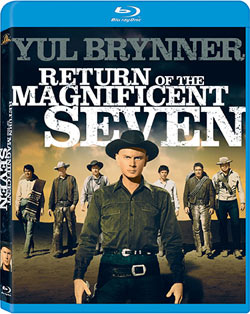 The first of two sequels to the 1960 classic western The Magnificent Seven, this bloody western only featured Yul Brynner from the original movie’s all-star cast. Once again, the residents of a Mexican village have been enslaved by an evil menace, this time an insane rancher named Lorca (Emilio Fernandez), who has corralled a small army of 50 gunmen to intimidate the citizenry into building a church in memory of his son. Chico (now played by Julian Mateos), an original member of the seven gunslingers from the first film, learns of the villagers’ situation and sends for Chris Adams (Brynner), who rounds up a new crew of seven gunslingers from various locales, including prison. The new bunch includes Warren Oates and Claude Akins. This mediocre film was followed by two more sequels including: the 1969 film Guns of the Magnificent Seven; and the 1972 movie The Magnificent Seven Ride.

The only bonus feature on this Blu-ray release is the Original Theatrical Trailer in high definition.