This week Walt Disney Studios Home Entertainment opens the Disney vault to present the animated classics Fantasia and Fantasia 2000 for the first time ever in a Blu-ray High Definition and DVD 2-Movie Special Edition, featuring 4 discs of material. In addition, Disney is releasing three documentaries this week, including Waking Sleeping Beauty, The Boys and Walt & El Grupo, which pull back the curtain for audiences to experience Walt’s travels, the musical talent of a legendary Disney duo, as well as the ultimate Hollywood comeback.

I had the opportunity to review all but the Walt & El Grupo documentary, which I will do and add to this article in the coming days. 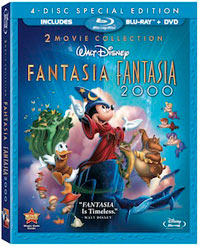 Fantasia was released in 1940 to great success, and the Blu-ray transfer of the film reveals the true magic, music and majesty of the animation classic, as never before experienced, with a state- of-the-art picture restoration and pristine 7.1 Digital Theater System Hi-Def Surround Sound. Fantasia is widely considered to be a better film than Fantasia 2000 for a number of reasons, but I enjoy both equally. The film contains seven sequences ranging in styles from abstract to humorous, resulting in a incredible piece of cinema history that lends itself well to the visual memory of the audience.

Fantasia begins with narrator Deems Taylor introducing the film and its reason for being. Disney would present eight classical compositions and set them to animated sequences that were not often the original intent of the composer. Taylor inserted commentary throughout the production, introducing new segments while an orchestra and conductor Leopold Stokowski were seen in silhouette tuning up or, in the case of the first segment, participating in the segment.

Opening the film was the Johann Sebastian Bach’s Toccata and Fugue in D Minor. Through abstract animation, using symbols and lines timed to the score, ‘Toccata’ moved from simple lighting changes with the orchestra to actual animation. Lines and music roll across the screen without a single thread of a plot, with animation perfectly timed to the score.

Fantasia then moves on to a section of The Nutcracker Suite by Pyotr Illych Tchaikovsky, going from the birth of spring through the Death of winter. The segment followed various dancing flora, fauna, and fairies mimicking the ballet styles of the original Nutcracker production. Again, everything is perfectly timed and flows together.

Fantasia continues to build with segment after wonderful segment, creating a richly painted story line, that jumps off the screen, filling the mind’s eye with color and wonder.

Among the bountiful Blu-ray special features in this release is the highly requested Academy Award nominated short Destino. Available for the first time ever on Blu-ray, the seven minute film is the result of a unique collaboration between Walt Disney and Salvador Dali begun in 1946, but put on hold due to studio financial concerns. In 2003, Roy E. Disney worked with a team of modern day animators to complete the film as a tribute to Walt’s pioneering artistic vision. Accompanying the highly anticipated short is an all-new feature length documentary entitled “Dali & Disney: A Date With Destino,” which explores the origins of the relationship between Disney and Dali, their collaboration on Destino, and ultimately how the film came to fruition so many years after its inception.

Considered avant-garde during its time, Fantasia has gone on to become one of the most popular movies of all time and today is considered a classic. In 1990, the film was selected for preservation in the United States National Film Registry by the Library of Congress as being “culturally, historically, or aesthetically significant”.

Fantasia is presented in a screen ratio of 1.33:1.

The stunning sequel begins where its predecessor left off, and includes seven completely new segments, with viewers watching a bustling Depression-era metropolis in the style of Al Hirschfeld’s famous cartoons, a flock of flamingos with slapstick yo-yo talents, an ark full of animals gathered by Donald Duck as Noah’s first mate, and musical life breathed into a family of flying humpback whales. 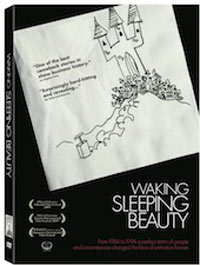 Between 1984 and 1994, The Walt Disney Studio’s animators created a series of highly acclaimed box-office hits, including The Little Mermaid, Who Framed Roger Rabbit, Beauty and the Beast and The Lion King. The documentary Waking Sleeping Beauty reveals a rare behind-the-scenes look at the studio’s resurrection, and at the internal strife that led to its subsequent decline.

It all began in 1984, when a stockholder revolt ushered in an aggressive new management team consisting of Michael Eisner, Frank Wells, Jeffrey Katzenberg and Walt’s nephew, Roy E. Disney. The new team and their young artists set out to reclaim the Disney legacy of making films that represented the cutting edge of animation, filmmaking and technology. However, with success came quarrels among the executives over who should take credit for the rebirth. The death of chief operating officer Frank Wells in 1994 only intensified the issues.

Director Don Hahn and Peter Schneider use film clips, home movies, and interviews, to present a absorbing portrait of the rise and fall of a storied entertainment company. 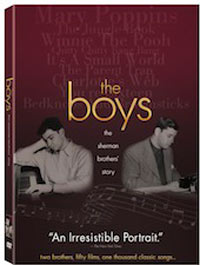 The Boys: The Sherman Brothers’ Story

The Boys: The Sherman Brothers’ Story is an in-depth journey through the lives of Robert and Richard Sherman, the incredibly prolific Academy Award-winning songwriting team. While their songs celebrated family entertainment and happy endings, their life together was not as harmonious. ‘The Boys’ goes behind the scenes, featuring interviews with Dick Van Dyke, Angela Lansbury, Roy E. Disney and many more, for a fascinating glimpse into how Walt Disney used the language of music to bring the brothers together.

The Boys: The Sherman Brothers’ Story is presented in Widescreen (1.78.1), with Dolby Digital 5.1 Surround Sound, Dolby Digital 2.0, in English, with Spanish Sub-titles. 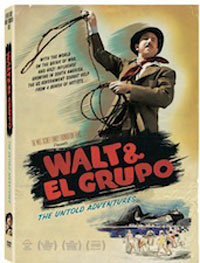 Walt & El Grupo centers on when the U.S. Government asked Walt Disney to be a cultural ambassador to South America in 1941. With a group of handpicked artists, later called “El Grupo,” Disney’s WWII road trip paved the way for two classic Disney films, Saludos Amigos and The Three Caballeros.

I will add a review for Walt & El Grupo after I receive the DVD.

The Boys: The Sherman Brothers’ Story