Pixar Animation Studios not only does it again with Toy Story 3, but does it bigger than any other animated film ever. Toy Story 3 is a wondrous adventure, stuffed with enough heart-wrenching drama and whimsical mischief to fill three movies, whether they be life-action or animated.

Buzz, Woody, and all of our favorite toys are reunited, joined by a whole new set of instant classics, as they all prepare for Andy’s departure to college, and his loyal toys find themselves in day care. Tom Hanks (Angels & Demons), Tim Allen (The Santa Clause), Joan Cusack (Confessions of a Shopaholic), John Ratzenberger (Up) and Don Rickles (Toy Story 2) reprise their roles as the voices of the iconic characters Woody, Buzz, Jessie, Hamm and Mr. Potato Head, respectively. They are joined by new characters voiced by Michael Keaton (Herbie Fully Loaded) as Barbie’s romantic foil Ken, Timothy Dalton (Hot Fuzz) as the thespian hedgehog Mr. Pricklepants, and Ned Beatty (Rudy) as the cuddly Lots-o’-Huggin’ Bear, among many others. And these toys won’t take sitting in day care lying down, so it’s all for one and one for all as plans for a great escape get underway. Pixar veteran and Toy Story 2 co-director Lee Unkrich successfully picks up the mantle of the Toy Story franchise, making his feature film directorial debut, working from a compelling original screenplay by Academy Award-winner Michael Arndt (Little Miss Sunshine). Toy Story 3 also marks the return of Pixar’s favorite composer Randy Newman, and is produced by fellow alumni Darla K. Anderson (Cars, Monsters, Inc.). The result is the world’s number one animated film in box office history and The Walt Disney Company’s second biggest film of all time. 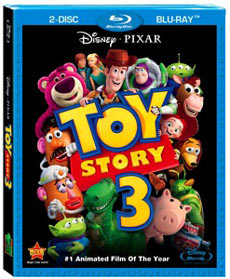 Cine-Explore (Disc 2) Presented in HD: Cine-Explore features a picture-in-picture commentary track by director Lee Unkrich and producer Darla K. Anderson, giving them both the chance to dissect each scene as Toy Story 3 plays on screen, with the help of storyboards and concept art. The material is informative, detailed and well worth at least one watch.

Film Fans and Studio Stories Featurettes (Disc 2) Presented in HD: Included in this group of production featurettes is “Roundin’ Up a Western Opening”, which reveals the filmmakers’ idea for Toy Story 3’s opening scene; “Bonnie’s Playtime: A Story Roundtable”, which finds director Lee Unkrich and the story artists discussing the creation of the difficult ‘Bonnie’s Playtime’ scene, which involved several new characters; “Beginnings: Setting a Story in Motion”, centering on screenwriter Michael Arndt, as he analyzes the opening scenes from Toy Story, Finding Nemo and The Incredibles; “Life of a Shot”, which features Toy Story 3 artists and technicians documenting the evolution of key shots from the movie’s opening sequence; “Paths to Pixar: Editorial” features a number of Pixar film editors sharing anecdotes about their careers; “Studio Stories” offers up three amusing animated anecdotes about life at Pixar, including ‘Where’s Gordon’, ‘Cereal Bars’ and ‘Clean Start’, showcasing an animator finding a hidden room at the storied studio, the majestic and Pixar cereal bar, and Toy Story 3 animators shaving their heads to mark the start of the movie, respectively; and “Making of Day & Night”, giving viewers a brief glimpse into the production of Pixar’s unique 2D/3D blended theatrical short ‘Day & Night’.

Family Play Features (Disc 2) Presented in HD: This is a batch of even more featurettes, including: “The Gang’s All Here”, an entertaining look at the returning voice talent for Toy Story 3 and an introduction to the voices of the new characters; “Goodbye Andy”, which finds the Pixar team preparing to bid farewell to the little boy who started it all, by exploring the character design, acting and animation in the scene ‘Andy’s Goodbye’; “Creating a Whole New Land” follows Buzz and Woody’s invasion of Hong Kong Disneyland; “Accidental Toymakers” looks at the Toy Story filmmakers’ unwitting role as toy designers; and “Toy Story Trivia Dash” challenges you to sprint to the finish with Woody, Buzz, Jessie and Rex as you quickly answer questions about all three Toy Story films.

Publicity Goodies (Disc 2) Presented in HD: If commercials, trailers, random promos and TV spots is your thing. Then enjoy a “Grab Bag” catchall, a hilarious series of “Ken’s Dating Tips,” a pair of “Lots-o-Hugging Bear Commercials” (plus a “Making Of” short that details their production), a “Dancing with the Stars at Pixar” quickie, a “TS3 Silence Trailer,” a “TS3 Anti-Piracy Trailer,” a “Character Intros” short, a “Poster Gallery,” five domestic and Japanese theatrical trailers and more.

Day & Night Theatrical Short (Disc 1) Presented in HD: ‘Day & Night’ – a wordless delight brimming with movement and music – is an entertaining short from the imagination of Pixar artist Teddy Newton.

Toys! (Disc 1) Presented in HD: A closer look at all of Toy Story 3’s beloved toys from updating the classic characters, to the creation of the Sunnyside Daycare and Bonnie’s Room toys.

Sneak Peeks (Disc 1) Presented in HD: Trailers are included for the 2011 theatrical releases of Tangled and Cars 2, plus the upcoming Blu-ray releases of Mater’s Tall Tales, The Incredibles, The Search for Santa Paws, Bambi, along with several Disney 3D titles.

Visit MyFantasyArt.com to see a batch of conceptual drawings from Toy Story 3.