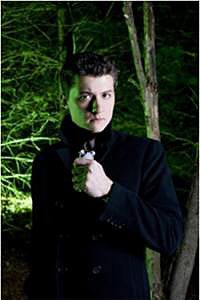 Ryan Buell, Founder of the Paranormal Research Society and star of the hit A&E series Paranormal State, which starts its fifth season on October 17th, and his team of investigators from the show, will be appearing during New York Comic-Con, at the A&E Home Entertainment/New Video Booth from 11:30 am-12:30 pm, this Saturday, October 9th.

With Halloween around the corner, travel deep into the strange and mysterious – and often terrifying – with Paranormal Research Society (PRS) founder Ryan Buell and his team of investigators in Paranormal State as they attempt to unravel inexplicable phenomena including sixth-sense experiences, ghost sightings, demonic disturbances, and brushes with the darkest areas of the unknown.

As the top-rated supernatural series continues on A&E, on DVD with The Complete Season Four and Ryan’s first book Paranormal State: My Journey Into the Unknown, discover what makes one of the country’s most tireless paranormal researchers tick, as he makes an appearance at New York Comic Con.

Find out more about Paranormal State at aetv.com/paranormal-state/meet-investigators.