Director Jonathan Mostow’s Surrogates examines the nature of technology-fed isolation and the inherent dangers that it breeds, including fabricated personas, anti-social behavior, and living a lie, which are admirable issues to take on. The problem with the film isn’t with its subject matter, but in the execution and believability that the movie lacks. Surrogates poses a number of worthwhile questions to us, and sounds the alarm on the pervasive nature of technology, and it doesn’t do so through a shallow script or a hail of bullets. And Bruce Willis’ iconic action persona does its best to elevate the gripping nature of the issues the movie faces off with. However, where Surrogates falls short is in it’s unbelievable and almost surreal depiction of today, attempting to create a parallel universe for its premise to take shape in.

According to the story, in the near future, technology allows humans to live their lives through robots they call surrogates. Humans have essentially cocooned themselves in their homes, never venturing outside. Instead, they explore life through their surrogate bodies, who may or may not resemble them, in essence, creating their ideal selves. Tom Greer (Willis) and his partner Peters (Radha Mitchell) are FBI agents assigned to investigate the destruction of two surrogates that has also caused their human hosts to be killed. 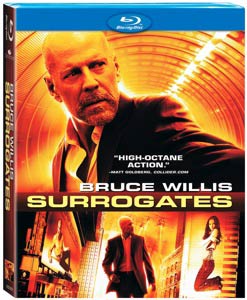 The use of surrogates is not universally endorsed with some human, who have created enclaves living in technology and machine-free zones, which are led by a man called The Prophet (Ving Rhames). Greer believes the rebellious humans have put their hands on a weapon that could fundamentally change society, though he begins to wonder if that might be a good thing, leading to a series of plot twists that culminate in society inevitably reevaluating its use of the powerful technology that makes surrogacy possible.

Where Surrogates does hit a home run is with its superior Blu-ray presentation, which enhances the adventure & suspense, and makes for enjoyable viewing overall. Touchstone mines the movie’s look and action sequences to produce a high-quality home video release for an entertaining but at times touch and go film.