What better way to end Halloween week with a review of a gritty low-budget slasher flick filled with blood & guts, deformed creatures, and hot young bodies just itching to be mutilated. Wrong Turn 3: Left For Dead, the latest addition to the franchise that just won’t go away, was surprisingly fun to watch, especially during a week when gore, violence and dark cult cinema have filled networks and cable stations, and everyone I know is trying to outdo one-another with the most vile creature costumes known to man.

Don’t get me wrong, Wrong Turn 3 will not change the course of horror, it doesn’t fill that strange void many diehard horror fans have been feeling lately, and it won’t be taking any Scream Awards home anytime soon (at least, I don’t think it will). But Wrong Turn 3 does what it sets out to do: provides some frightening and disgusting moments, offers charismatic and somewhat convincing performances from Tom Frederic & Tamer Hassan, and even almost makes up for Wrong Turn 2 (aside from Henry Rollins blowing up old folks), even though it took some of its kill scene cues from that film. Director Declan O’Brien unfortunately doesn’t take any chances with Wrong Turn 3, and settles for a by the numbers shockfest who’s main problem is taking itself far too seriously… aside from the lack of original writing and the host of issues that bred. I’m just relieved Wrong Turn 3: Left For Dead wasn’t nearly as horrid as I had envisioned. The fact that it takes itself so seriously actually made for many moments of unexpected – and most likely unintentional – humor, which in a twisted sorta way, made it even more fun. Come on, no one thinks Attack of the Killer Tomatoes had an in depth storyline, but I’d be first in line for a midnight screening. Maybe that’s a bad analogy, since that film knew its place in cinematic history. Wrong Turn 3 simply won’t accept its fate. 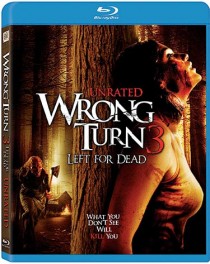 In what has become a Wrong Turn tradition, the movie opens with a hilariously gory kill sequence made just for slasher film lovers, featuring a small group of whitewater rafters. A well-endowed female takes off her shirt and suddenly gets shot through her left breast with an arrow while one of her companions attempts a cowardly escape through the woods, only to get chopped into thirds by essentially a giant egg slicer. I don’t know why the filmmakers wasted such a primo kill scene so early on in the movie, but it was still one for the books, sure to end up on some slasher film reel best-of somewhere.

Enough with the theatrics and onto the story though. Wrong Turn 3 centers on a group of convicts – a slick car thief, a gangbanger, a white supremacist, and a wrongly convicted war veteran – who are being transported from one prison to another by a bus which takes a “wrong turn” through the West Virginian backcountry. The prisoners are being supervised by a guard named Nate (Tom Frederic), whose bidding his time while trying to get into law-school. Three-Finger, the surviving deformed mutant from Wrong Turn 2: Dead End, sabotages and disables the bus with his tow truck, and the prisoners take their chance and escape, but not before taking Nate hostage in the process. After stumbling upon an overturned truck filled with millions in cash, that happens to be just sitting in the middle of the woods, they think they’ve got made. But first, they must make it out of the woods alive.

Wrong Turn 3: Left For Dead is strictly for fans of low-budget slasher films, cult cinema and especially parodies, who will appreciate the humor in its near-awkward seriousness and some of the decently gory kill scenes.

The Wrong Turn 3: Left For Dead Blu-ray Disc is presented in widescreen format 1.78:1 aspect ratio featuring English 5.1 DTS HD Master Audio, which is crisp and actually well done for a low-budget film of this type, along with Spanish and French 5.1 DTS, and with English, Spanish and French Subtitles.