The Legend of Drunken Master (a.k.a. Drunken Master 2) and The Blind Swordsman: Zatoichi are the final two films featured in the Ultimate Force of Four Blu-ray box set, which was released on September 15th (I reviewed Iron Monkey and Hero individually). Here are two more examples of the best of Asian martial arts action and Japanese swordplay cinema, each bringing their own unique strengths to storytelling: Zatoichi for its witty charm and cerebral drama; and Drunken Master for its dizzying heroic stunts and hilarious endearing comedy. 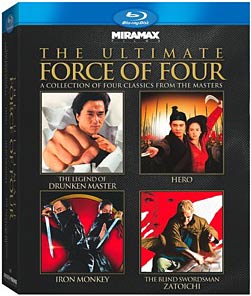 Beat Kitano’s The Blind Swordsman: Zatoichi, isn’t as flashy as some Japanese swordplay films, and you won’t find many extended fights. The film chooses instead to meditate upon simple, direct moves and intensely thought out confrontations. Zatoichi is based on the iconic Japanese character who’s been featured in more than two-dozen films, as well as a successful television series, all following the exploits of its titular character, a blind swordsman (in this case played by Kitano). As the story begins, Zatoichi comes to the aid of a small village struggling to survive a deadly gang war. In spite of his disability, he is a fierce fighter who isn’t intimidated by the criminals threatening his new friends in the town. However, after the conflict forces the gangs’ leaders into hiding, Zatoichi must root them out before making them pay for the perils they’ve reaped on the town’s residents. Standing in his way is an equally capable ronin named Hattori Genosuke (Tadanobu Asano), one of the few warriors the blind swordsman has encountered who can counter his deadly strikes. As Zatoichi hones in on those responsible for the strife, he leaves a trail of blood and death in his wake, determined to restore peace to a region besieged by corruption.

Kitano’s blind swordsman is an on-target representation of the legendary character, thanks in no small part to Kitano’s charismatic presence on screen. While Zatoichi’s fight scenes are brief, they’re still incredibly entertaining to see, and the star/director’s hallmark wit adds depth and excitement to the film’s story line. The central villain in the film, Genosuke, is a very interesting and complicated character, taking whatever work he can to pay for his sick wife’s medical treatment. He and Zatoichi play off of each other well, always fully aware of how their war could end.

The Legend of Drunken Master features legendary martial arts star Jackie Chan playing another iconic Asian character – Wong Fei-hung. The film features eye-popping stuntwork, Chan’s trademark physical comedy, along with a hilarious performance by late Hong Kong actress Anita Mui – who passed away in 2003 from cervical cancer. The Legend of Drunken Master (a.k.a. Drunken Master 2) is a charming film that perfectly balances its humor with relentless, kinetic action. It perfectly captures the essence of Chan’s influential work and career.

Drunken Master 2 tells the story of a young Wong Fei-hung (Chan), a student of Zui Quan (Drunken Fist-style martial arts) who must choose between honoring his father (Ti Lung) – who has forbade him from any fighting – and protecting his country’s most priceless artifacts, which are being illegally exported by a sinister British industrialist (Louis Roth) determined to profit from the Chinese treasures. Along the way, he’s helped by his witty step-mother (Mui), and an elderly General (cult action star Lau Kar-Leung). Soon Wong is forced into fierce confrontations with a litany of foes, including a well-meaning counter intelligence officer (Andy Lau) and a nasty fighter who’s an expert with his kicking techniques (Ken Lo). He also learns that alcohol transforms him into a nearly unbeatable pugilist.

Drunken Master 2 has a familiar story, but it’s told in such an exciting way, with truly funny comedy and stunning fight sequences. Everything boils down to a climax that’s now included on the rewind reels of many a martial arts film documentary.

Unfortunately, this Blu-ray edition of Drunken Master 2 only includes a 7 minute interview with star Jackie Chan.