Joss Whedon, who introduced the world to kick-ass female vampire slayers, had quite a difficult time getting Dollhouse off the ground. Fox gave the show a time-slot that seemed to show little faith in its prospects for success. Add to that the writer’s strike, and the minimalist marketing campaign that first appeared on the tubes, which presented an utterly weak characterization of the show’s plot-line, filled with little more than the gorgeous Eliza Dushku slowly rising from a mysterious white bed (not that this wasn’t enjoyable to watch couple of times). In fact, based on Dollhouse’s first TV spots, my wife refused to sit through the pilot with me. This, in spite of being a huge fan of Whedon’s Buffy and Angel TV series. My feeling was, ‘what’s the worst that could happen?… Eliza Dushku on screen for a few episodes of ‘who-cares-what-the-story-is’. I could live with that. 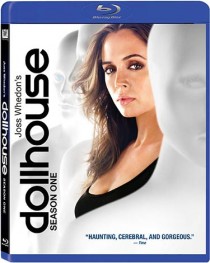 However, having followed the near-mythic career of cult writer and producer Joss Whedon, I expected – and have definitely received – much more with Dollhouse, which has now left an indelible mark on Friday night DVR recordings and pay-per-views. It’s an enthralling, fascinating and complicated action drama, whose creator has shown fearlessness in the development of its characters.

While it has hints of other shows and films, including The Stepford Wives, smart, ballsy writing and character development brings the show to a completely new plain. Whedon, who has a five year plan for the series, has said that he’s already worked out how the main characters will evolve over that time. That kind of meticulous calculation can only continue to weave a visionary sci-fi world that mutates, morphs and then retracts on the fly.

Dushku (a Whedon alum from Buffy the Vampire Slayer) plays Echo, who’s in the employ of an illegal – and literally ‘underground’ – criminal organization that implants its operatives with other people’s lives, histories and predetermined skills, in order to perform various missions and dangerous tasks, which can range from the erotic, to the criminal, or even dangerous. These “dolls” can become anyone for the right price; a lover, fighter, assassin, even a best friend. Once their assignments are complete, their memories are thoroughly wiped and they are released back into a staging area called the “Dollhouse”, where they live with their fellow colleagues under the watchful eye of security, lead by former police officer Boyd Langton (Harry Lennix), who’s also Echo’s handler.

While in the Dollhouse, the agents’ minds are basically blank, so they have no knowledge of who they really are, who or where their families are, or even basic social functions. However Echo is slowly becoming self-aware and throughout the first season shows signs of rebellion and disenchantment. At the same time, an FBI agent (Tahmoh Penikett), who’s been tagged a lunatic by his colleagues, is on a mission to bring down the organization, partly fueled by a visual infatuation with Echo.

Throughout season one, Dollhouse becomes increasingly complicated, and injects wholly original story elements that not only keep things fresh, but draws viewers deeper into its intriguing world. It’s a hugely entertaining show that surprises and seduces, while presenting mythologies and subjects that are well worth thinking about and discussing.

Bonus Material
The Blu-ray is well-worth the purchase, if merely for the two additional episodes included: the unaired pilot Echo, along with the thirteenth episode, Echelon One, which was shot on video at a reduced budget. That future-set episode sort of wraps up some plot-lines, in case the show was canceled.

Here is the list of episodes presented in the 3-disc Blu-ray set.

But like I said, there’s nothing wrong with a little sexuality.