Dragonball Evolution, based on the wildly popular manga, and later anime, series by Akira Toriyama, stars Justin Chatwin as a high school outcast named Goku, who lives with his grandfather, martial arts instructor Gohan (Randall Duk Kim), who spends his days fantasizing about fellow high schooler Chi Chi (Jamie Chung). The film’s story-line is soon established when, on his 18th birthday, his grandfather gives him a mysterious “Dragonball”, along with the knowledge that there are only seven that exist in the entire world, while he recounts the legend that whoever unites all seven Dragonballs will be granted a perfect wish. 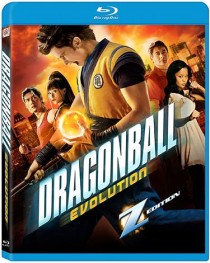 Director James Wong successfully captures the spirit of the fast-paced, cornball style of the source material, with a script that contains enough action and set pieces to mollify its intended audience. However, with a confusing timeline, poor character development and a lack of solid martial arts action, the film stumbles along with little to offer for all but that base of fans.

Overall, Dragonball Evolution is a mildly enjoyable, fast-paced action adventure that doesn’t take itself too seriously… which it shouldn’t.

Bonus Features
The Dragonball Evolution Blu-ray includes some fun bonus features. Goku’s Quest, a Blu-ray exclusive scavenger hunt game, has viewers interact by pressing the remote control whenever a Dragonball icon appears on-screen. Built strictly for kids, the game should be a somewhat fun pastime the first few times around. Next up are eight deleted and extended scenes, all presented in HD. Goku’s Workout, also presented in HD, demonstrates some of the moves from the film. This was probably one of the more interesting featurettes to me, with a good, clean skills presentation. Fox Movie Channel Presents: Making a Scene looks at the process of preparing for and shooting one of the key fight scenes in the movie. The featurette includes many cast and crew interviews, along with behind-the-scenes clips. Fox Movie Channel Presents: Life After Film School With Justin Chatwin includes an extended interview segment with the film’s star, Justin Chatwin. There is also a Brian Anthony music video for the song Worked Up, along with a pretty funny gag reel, both presented in HD. Disc two of the set contains a digital copy of Dragonball Evolution, which can be downloaded onto a computer, iPhone, or PDA.