Paycheck is based on the short story by noted science fiction author Phillip K. Dick, and revolves around Jennings (Ben Affleck), an engineer who works for a company that uses his unique gifts to reverse engineer their rivals’ technology, alter it slightly, and then wipes his memory after he completes every project. When he is offered a top-secret project by James Rethrick (Aaron Eckhart), he’s told the job will take three years and his mind will be completely wiped of the events as is normally the case. Against the advice of his friend Shorty (Paul Giamatti), he takes the assignment. 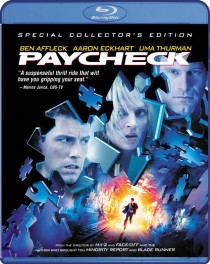 After his mind is wiped at the end of the job, he heads to the bank to collect his multi-million dollar payment where it turns out that he, sometime during the three years of work, signed the money away to a stranger and exchanged it for a group of nineteen seemingly worthless items, including a mysterious key, a normal pack of cigarettes, sunglasses, and a bullet, among other things.

Jennings must use these items to regain his memory while his shady contractor is trying to kill him, and the government is trying to arrest him for a crime he doesn’t remember committing. Every item plays some role in restoring his life, his memory, and apparently, the world’s future.

All this while exploring his relationship with Rachel Porter (Thurman), a bioscientist who is a vital part of triggering what is left of the scraps of memory within him.

Paycheck is an involved thriller that’s an enjoyable watch and definitely keeps you on the edge of your seat, but it comes at you from so many unbelievable directions, that its difficult to simply enjoy the action fully. Removing the multiple improbable/impossible storylines, action-master John Woo put together an entertaining sci-fi action thriller, on par with his other American efforts, including Mission Impossible 2, Hard Target and Face/Off, but with writing that just doesn’t compare with his early cult classics, like Bullet in the Head, Hard Boiled and The Killer, all of which have a heart and soul his U.S. films haven’t been able to achieve.

Bonus Features
Woo’s penchant for crystal-clear cinematography makes for an incredible transfer to the Blu-ray format. The action sequences look amazing, and make for an all-around enjoyable disc presentation. While the extras are primarily from a previous DVD release, they also look stunning in the new format as well. There are two separate audio commentary tracks, the first with director John Woo and the other with screenwriter Dean Georgaris. Both are informative, and provide insight into writing and directing action on film, as well as the challenges in adapting the original Phillip K. Dick short story. Then there is a making-of featurette titled Paycheck, as well as a separate feature titled Tempting Fate, that focuses on the stunts from the movie. I thought Tempting Fate was more enjoyable to watch, but both are worth a look at least once. There are also seven deleted/extended scenes included to round out the bonus material.

Get the new Paycheck Blu-ray, and all the classic John Woo titles in our Asian Cool Cinema store RIGHT HERE.