Based on the Saturday Night Live sketch of the same name, Wayne’s World enjoyed immense success in theaters in 1992. The wacky, irreverent comedy about the adventures of two amiably aimless metal-head friends, Wayne (Mike Myers) and Garth (Dana Carvey), cemented itself as a pop culture favorite for years as a staple of the home viewing circuit.

From Wayne’s basement, the pair broadcast the talk-show “Wayne’s World” on local public access television, where they discussed music, goofy inventions, women, and whatever else might be swirling around their heads on any given day. 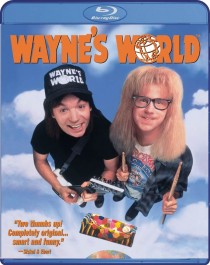 The show soon comes to the attention of sleazy network executive Benjamin Kane (played by Rob Lowe) who wants to produce a big-budget version of “Wayne’s World”, in order to promote a Chicago-area arcade. He also has his eyes on Wayne’s beautiful girlfriend, a rock singer named Cassandra (played by Tia Carrere). Wayne and Garth must battle the executive to save their show’s “integrity”, and Wayne’s true love.

Wayne’s World is a film that most people either loved or hated. For me, it still has it’s original charm, but it’s not nearly as funny as it once was. Its best moments are when it pokes fun at itself, with Mike Myers and Dana Carvey doing a brilliant job of keeping the viewer interested in seeing what comes next, even when the jokes fall terribly flat. One of the film’s best segments features Wayne and Garth discussing the evils of product placement, while joyfully placing cans of Pepsi and Pizza Hut products in front of the camera. Wayne’s World goes down as a great moment in time, but younger audiences probably won’t find it nearly as hilarious today, as viewers did when it first hit screens in 1992.

Bonus Material
Wayne’s World makes its Blu-ray premiere with a small, but entertaining amount of extras, top-lined by an interesting and reflective commentary track with director Penelope Spheeris, as she discusses the movie’s Saturday Night Live roots, the differences between developing for television and features, the hardcore soundtrack, and more. Extreme Close-Up features the cast and crew discussing Wayne and Garth’s beginnings, the main characters’ improvisations while shooting the film and more. Both the commentary and the featurette are entertaining, and somewhat make up for the limited amount of material on the disc. The extra features are rounded out with the film’s theatrical trailer presented in HD.