Rachel Phelps (Margaret Whitton) is a beautiful, smart, goal-oriented, former exotic dancer who just inherited a baseball team from her recently deceased husband. Unfortunately, it’s the Cleveland Indians, the worst team in Major League Baseball. She hates everything about the town and the team, so she hatches a scheme to move the franchise to sunny Miami, Florida. All they need to do is come in last in the league – a feat that shouldn’t be so difficult, given their illustrious recent past. 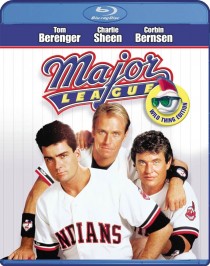 To seal the deal, she hires Lou Brown (James Gammon) as the new manager, who has been guiding the minor league Toledo Mud Hens for the past 30 years. She then has him sign the worst players to ever grace a professional baseball uniform, including pitcher Ricky “Wild Thing” Vaughn (Charlie Sheen) – a punked-out crazy who throws wildly; catcher Jake Taylor (Tom Berenger) – a washed-up womanizer with knee problems; outfielder Willie Mays Hayes (Wesley Snipes) – who runs fast enough to steal a lot of bases, but can’t hit the ball; third baseman Roger Dorn (Corbin Bernsen), a product endorser more concerned about fielding commercial offers than grounders; and Pedro Cerrano (Dennis Haysbert), an outfielder who practices voodoo.

As expected, the Indians get off to a terrible start, but after discovering Rachel’s plan, the team decides to get their act together and suddenly start winning games and raising stadium attendance to record levels.

Bonus Features
Bonus material includes a commentary by writer/director David S. Ward and producer Chris Chesser, which contains some funny retrospectives on the film; My Kinda Team: Making Major League, featuring Charlie Sheen, Tom Berenger, Corbin Bernsen, David S. Ward, Dennis Haysbert, Bob Uecker, and other members of the cast and crew discussing their experiences making Major League; A Major League Look at Major League features professional baseball players and broadcasters discussing their fondness for the movie and how accurate it is to major league culture; Bob Uecker: Just A Bit Outside is a retrospective of veteran player and broadcaster Bob Uecker’s career and his portrayal of Harry Doyle in Major League; Alternate Ending with Filmaker Introduction contains producer Chris Chesser introducing an alternate ending that was seriously considered until the film was previewed; A Tour of Cerrano’s Locker is a funny promotional piece taped during the film’s production, with Dennis Haysbert in character showing off items from his locker. The extra features are wrapped up with a set of 50 promotional photos.