The 2007 Oscar winner for Best Picture, No Country for Old Men, arrives in a new collectable 2-disc Blu-ray edition tomorrow, April 7th, from Miramax Films, Paramount Vantage and Walt Disney Studios Home Entertainment. Based on the novel by Pulitzer Prize-winning author Cormac McCarthy, No Country For Old Men is easily Joel and Ethan Coen’s most gripping and ambitious thriller that immediately cuts to the chase, with a masterful mix of suspense and black humor. 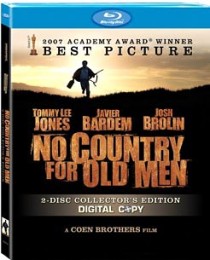 While hunting in the West Texas desert, near the Mexican border, down-on-his-luck Vietnam veteran Llewelyn Moss (Josh Brolin) stumbles upon the remnants of a drug deal gone bad. While attempting to assist a lone survivor of the gun battle, Moss eyes a briefcase, and soon finds it’s full of cash. Ever the instinctive survivalist, he takes every precaution he can to remove any evidence of his involvement at the location. However, Moss’ good nature gets the better of him, and he circles back to provide water to the survivor. In doing so, he becomes the target of crazed assassin and “cleaner”, Anton Chigurh (Javier Bardem), who’s looking to strike out on his own. Life is cheap for Chigurh, a cold-blooded killer looking to keep the money for himself. Now the two men go head to head in a deadly game of cat and mouse, analyzed from a distance by small town Texas sheriff Ed Tom Bell (Tommy Lee Jones).

The performances across the board by the lead and supporting actors, power the film through a tunnel of winding tension. From Josh Brolin as the prototype Coen protagonist, only with more depth, anger and desperation; to Bardem as one of the most original and savage psychopathic killers in cinematic history; to Tommy Lee Jones as the aging Texas lawman confused about the rise of human brutality and suffering; right down to the strong and poignant supporting performances by Woody Harrelson and Kelly Macdonald.

No Country for Old Men is a brilliant game of cat and mouse that never lets up, right up to its heart-stopping final act.

Bonus Features
The presentation comes with over five hours of bonus features available on disc for the first time ever, focusing on extensive interviews with the filmmakers, stars and technical team behind the film. Overall, I would say the bonus material is going to be enjoyed most by true connoisseurs, but there’s something for everyone in the mix.

The disc also contains a mass of in-depth interviews and conversations with the Coen Brothers, Tommy Lee Jones, Josh Brolin and Javier Bardem, mostly taken from promotional appearances on news and talk shows.

Disc Two contains a Digital Copy of the film that enables viewers to watch it on the go, in their choice of iTunes or Windows Media formats.

No Country For Old Men is presented in its original aspect ratio of 2.35:1 in a 1080p transfer that looks absolutely stunning. This isn’t easy to achieve with the amount of scenes shot in darkness, but the details hold up very well. The audio is uncompressed PCM 5.1, and worked extremely well on my surround system.