Marley and Me, based on John Grogan’s bestselling non-fiction book that recounts the author’s life with an uncontrollable Labrador Retriever named Marley, became a runaway hit in theaters, December of last year. Marley’s dizzying behavior had been the focus of Grogan’s Florida newspaper column, winning over readers long before the book came to pass. Now, the long-awaited surprise hit of he holiday season is on Blu-ray disc, with a unique mix of extras, along with digital and DVD copies of the film. 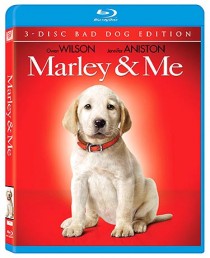 Marley & Me is an irresistible movie that can’t help but play as a satisfying family treat. As the heartwarming tale begins, newlywed reporters John and Jennifer Grogan (Own Wilson and Jennifer Aniston) are relocating to sunny Florida, leaving behind the cold winters of Michigan. They both find jobs with local newspapers, but John’s writing assignments tend to be less than inspiring. As time goes on, John senses Jennifer’s desire to start a family, and John sees his dreams suddenly go up in smoke. With hopes of getting his wife’s mind off the prospect of kids, and based on the advice of his friend Sebastian (Eric Dane), John buys Jennifer a yellow Labrador puppy for her birthday.

Thus begins the Grogan family’s life with Marley, a lovingly schizophrenic dog with a constant need for affection. As the mischievous Marley chews through their furniture and makes the couple’s life a living hell, the Grogans somehow see through the surface issues and start to understand Marley’s importance in their lives. The precocious pet sees the family – which grows in spite of John’s plan – through the ups and downs of life and love.

Jennifer Aniston and Owen Wilson are perfect for their roles; both are affectionate and realistic in dealing with an exuberant Marley, and the children they add to the family along the way.

It’s a sentimental movie, sometimes a bit cute for m tastes at times; but so what, that really what this film is supposed to be.

Bonus Features
The Marley & Me Blu-ray comtains a good number and variety of bonus features that follow the film’s production, particularly the aspects of training and dealing with animals in film. Fox also included both a digital copy of the movie, as well as a DVD disc (the DVDs are intended for those looking to upgrade to Blu-ray in the near future, so they don’t have to buy the Blu-ray version later on). The extras focus mainly on Marley, including casting animals for the various incarnations of Marley, along with his antics on-set. There are also a bushel of 19 deleted scenes included, with a commentary track by director David Frankel, along with a gag reel. There’s also a nice featurette that focuses on the importance of animal adoption.