Paramount recently released two more classic films from their library for the seminal Centennial Collection, a series that includes restored versions of the studio’s classics, along with thorough extras and bonus material. Many of the movies released rank among the best in American cinema, and The Odd Couple is one of those films. 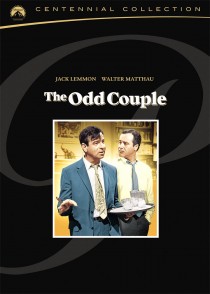 Based on Neil Simon’s award winning play, The comedy classic stars Jack Lemmon as Felix Ungar and Walter Matthau as Oscar Madison, two best friends who decide to live together at a turning point in both of their lives. Hilarity and chaos ensue, as their radically opposite lifestyles start to drive each other mad.

Neil Simon is a master at taking ordinary people in everyday situations, and creating humor everyone can relate to on some level. Like two divorced men who decide to share a New York City apartment. Lemmon and Matthau, who previously worked together in The Fortune Cookie, have the timing of a trained vaudeville team, but with the natural sense and comfort of reality. Felix Ungar is meticulous to a fault, while Oscar Madison would put any college dorm room post-wild party to shame. The Odd Couple is an endearing film that was a pure joy to watch again.

Bonus Material
The Odd Couple has a variety of new material for this release, making it well worth the money, even if you already own a previous DVD version. The extras begin with a brand new Commentary by Charlie Matthau and Chris Lemmon, sons of the on-screen duo that created the classic film. Both actors have striking resemblances to their respective fathers, and Charlie Matthau is also a director with five or six features under his belt. Both discuss what it was like growing up with their famous fathers. In The Beginning, starts off as a history lesson on The Odd Couple story; first as a play, then a film. The featurette then goes to fans and cast members from the movie talking about Lemmon and Matthau. Another new featurette, Inside The Odd Couple, is filled with stories from the set of film, with many of the actors involved discussing their favorite scenes and experiences while working on the production.

The Odd Couple: A Classic contains multiple entertainment icons and funnymen, including Brad Garrett and Larry King, giving their props to the comedy classic, and how the film has influenced their own work. Matthau & Lemmon follows the careers of the two stars. There are also two Photo Galleries, including the Production and The Movie, which contain a few dozen archived photos, along with the previously released Theatrical Trailer.