After the success of Madagascar, releasing a sequel was a given for DreamWorks. But the studio went that extra step and created another gem of an animated film with Madagascar: Escape 2 Africa. While M2 follows a similar formula to the the first, featuring Alex the Lion (Ben Stiler), Marty the Zebra (Chris Rock), Gloria the Hippo (Jada Pinkett-Smith) and Melman the giraffe (David Schwimmer), going on an adventure that’s far beyond their capabilities, you still care deeply about the hapless quartet. Madagascar 2 creates genuine moments of laughter and touching nods to the nature of spirit and determination.

In the new film, the unlikely team have their eyes set on a return to New York in a jet repaired by the famous Penguins. Of course they don’t get back to NYC and wind up deserted in the African wilderness instead. Little does Alex know that he’s about to stumble upon his roots, winding up in the kingdom of his father – King Zuba the alpha lion. Dramedy ensues when a rival lion (voiced by Alec Baldwin) has Zuba, his wife and Alex banished from the kingdom. What’s worse, their land is threatened when the entire water supply is put in jeopardy. A light and enjoyable adventure ensues that makes this sequel well worth watching. 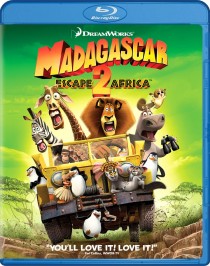 The special features are just as remarkable with a thorough and interesting variety of extras that has something for both kids and adults. There are the usual commentaries and behind-the-scenes cast interviews, but there are a bus load of videos and games for the kids to interact with.

Those interested in the making of Madagascar 2: Escape 2 Africa, will enjoy The Animators’ Corner (HD), which features a filmmakers’ commentary, early animatics, actors recording their voice work and more behind-the-scenes material playing along with the movie.

There are a series of behind-the-scenes featurettes, including It’s a Family Affair: The Cast of Escape 2 Africa, The Making of Escape 2 Africa, Crash Landing and African Adventure (All in HD). Together, they dissect every aspect of the film, from conception to post-production.

Jambo Jambo: Swahili Speak (HD) is an interesting but brief lesson on the language of Swahili. The Bronx Zoo: Madagascar (HD) looks at an exhibit at The Wildlife Conservation Society in New York.

There are two new penguin shorts – Popcorn Panic and Gone in a Flash (Both in HD). The first is a 12 minute comedy in which the penguins try to stop a zookeeper from cracking down on zoo patrons feeding the animals. Gone in a Flash is the same length as the first and features another adventure with the penguins and King Julien. Both of these tales are built for kids, but ‘big kids’ may enjoy them as well.

The extra features are topped off with a series of Easter Eggs, The Heart of a Lion (HD), which is accessed through the BD Live feature, a Blu-ray exclusive Trivia Track (HD), and a series of music videos that allow kids to listen to short clips for each song from the film and then enter the DreamWorks Animation Jukebox and watch fifteen minutes of musical clips from several of the studio’s films.