On January 27th, Paramount Home Entertainment will release an Extended Two-Disc Director’s Cut of David Fincher’s (Se7en, Panic Room) poignant suspense thriller Zodiac on Blu-ray. The film, which quickly became one of the most talked-about and critically-acclaimed movies of 2007, is a triumph of craftsmanship, set design, acting and cinematography, fully stocked with a double-barrel cast of top-notch actors in both the lead and supporting roles, all of whom give affective and understated performances that resonate well enough to make you support and fear their precarious positions.

Zodiac is based on the true story of the notorious “Zodiac” serial killer and the intense manhunt he inspired. The Fincher touch creates a haunting examination of human obsession, in this case one man’s desire to kill and another’s quest for the truth. 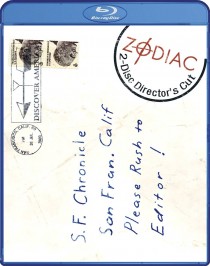 Mapping David Fincher’s progression as a filmmaker one clearly sees the facility he’s developed at using color, design, well-thought out storyboards, and brilliant actors, to move his films along at just the right speed and to keep you interested. With his follow-up to Zodiac, The Curious Case of Benjamin Button, Fincher takes the ultimate step forward, removing typically popular genre underpinnings (horror, thriller, crime, etc.) almost completely and relying solidly on the skills that have been organically honed through his previous work. Interestingly, Benjamin Button has fared much better at the box office than Zodiac. The awards season probably helped the film’s marketing campaign but Fincher has become a master storyteller who will undoubtedly take his rightful place among the mantle of the best some day.

I also thought it was exciting to see a filmmaker put CGI to good use, for example how he takes the audience from 1969 to the mid-1970s. Again, Zodiac could be seen as a primer for the brilliant use of digital effects in Benjamin Button.

The “Director’s Cut” only contains about 5 minutes of new footage, so those who’ve already watched the film, would want the Blu-ray release for its many extras, which include a staggering three hours of bonus material, headlined by a thorough documentary on the actual Zodiac case which alone is worth putting down your money for.

This Blu-ray set has most of the featurettes on the second disc, with only the film and two commentaries on disc one.

Director’s Commentary – Fincher provides an enjoyable commentary, as he has much to say about the production process and some of the more artistic decisions that went into altering real life aspects of the Zodiac case.

Cast and Crew Commentary – This second track is made up of two groups – the first of which is Jake Gyllenhaal and Robert Downey Jr. giving humorous comments on their experiences during the shoot. The second is producer Brad Fischer, along with writer/producer James Vanderbilt and famed crime novelist James Elroy. There’s also some fun here, but it’s a much more thorough discussion on the making of the making of the film and what material was added back in this cut.

Zodiac Deciphered – This is a nearly one-hour, seven-part making-of featurette that takes you behind the scenes during filming. It contains various interviews with the crew and audio clips with the cast. This, along with the featurette on the actual murder investigation were the most entertaining extras on the disc for me. This featurette is presented in HD.

The Visual Effects of Zodiac This 15 minute featurette takes us through the process of how some scenes were created via blue screen and computer effects. The main reason for this was mainly due to changes places had gone through over the years. It was very interesting watching various shots go through the entire process from conception through visualization. This featurette is presented in HD.

Previsualization is another “tech” short, and takes the viewers through 3 key scenes: Blue Lake Springs, Lake Berryessa and San Francisco, and compares the final edits with their pre-vis versions.

This is the Zodiac Speaking (1:40:24) – This feature-length documentary is split into four parts, one for each of the Zodiac’s known killings. It contains interviews with various people involved with the cases, explaining the crimes and their assumptions on what happened. The most interesting, and frightening, aspects are comments by the two survivors Mike Mageau and Bryan Hartnell, who describe their encounters with the killer and their friends that didn’t survive the attacks. This featurette is presented in HD.

His Name Was Arthur Leigh Allen This engaging 40-minute featurette contains interviews with those who knew Arthur Allen, and they describe why they believe him to be the Zodiac. There are also skeptics interviewed, who give opposition theories on why he couldn’t possibly be the killer. This featurette is presented in HD.

All-in-all, a fantastic set of features to explore and learn from.

Below is a complete list of the Blu-ray release’s Bonus Features.