Breakfast at Tiffany’s was re-released on a very special edition DVD on January 13, 2009, from Paramount Home Entertainment. The bright-spirited and unflappable Audrey Hepburn stars in the two-time Oscar-winning film, that brings back a flavor of classic and stylish New York. The DVD is part of the Paramount Centennial Collection, and is timed in conjunction with Hepburn’s 80th birthday anniversary. Hepburn manages to project a playful innocence in her screen roles, yet exudes an amazing level of class, dignity and charisma, that continues to inspire and bedazzle movie-lovers today.

Hepburn stars as Holly Golightly, a New York City party girl who embarks on a wildly entertaining, comedic adventure to find love in the big city, when all she really has to do is look next door. The film has a simple storyline, made powerful by masterful character development, sharp and exuberant dialogue, and wonderful performances.

Directed by Academy Award-nominee Blake Edwards, whose resume includes the classic comedies The Pink Panther, The Great Race, 10 and Victor Victoria, Breakfast at Tiffany’s dances back and forth across the screen, with buoyant music, and good-spirited fun. 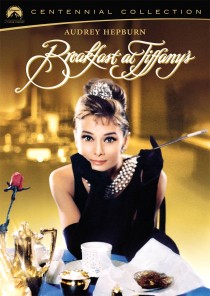 The new DVD edition is complete with a two-disc set, a beautifully designed eight-page memorabilia booklet (ahh paper), featuring charming color photos of the star in whimsical moments from the film, all in numbered series packaging.

The release is also full of bonus material, including a commentary by producer Richard Shepherd, along with numerous featurettes, including Henry Mancini: More than Music, which offers an thorough look at the life of this exceptionally talented composer, who has created theme music that continues to be embedded in the fabric of pop culture; A Golightly Gathering, which reunites the participants of the classic cocktail party and features fun interviews filled with great facts and trivia from the film; Behind the Gates: A Tour is a very interesting and informative tour of Paramount Studios; and Brilliance in a Blue Box is a brief history of the namesake jewelry store.

The abundant extra features also include Audrey’s Letter to Tiffany’s, The Making of a Classic, It’s So Audrey: A Style Icon, the original theatrical trailer, and wonderful vintage photo galleries.

One of the most interesting featurettes is Mr. Yunioshi: An Asian Perspective which contains reaction to Mickey Rooney’s portrayal of the over-the-top stereotype of Asians of the time. The charm and magnificence of the film was only diluted by the inclusion of that offensive character.

A must have for Hepburn fans, film fans, and those interested in quality movies.

Below is a trailer for Breakfast At Tiffany’s.