Yesterday, Fox Home Entertainment released the noir thriller Max Payne on DVD and Blu-ray. The film stars Mark Wahlberg as a damaged cop, hellbent on avenging the murder of his family. He’s joined by Mila Kunis (Forgetting Sarah Marshall), who plays Russian assassin Mona Sax, who doesn’t seem to totally fill-out the dark leather outfits she wears throughout the movie. Sax is also looking to lay down some pain, on those responsible for the death of her sister (played by Quantum of Solace’ Olga Kurylenko).

So – you have an Oscar-nominated talent, alongside one of Maxim Magazine’s Hot 100 for 2008, and a Bond girl with the smoothest skin this side of the Ukraine. What happened? The film must have been cursed by the string of rushed videogame adaptations that have pounded into theaters in recent years. 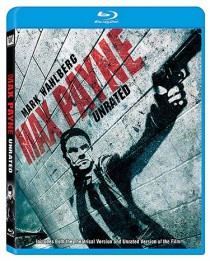 I had such high expectations for Max Payne, when it was released in theaters in October of last year. The game was groundbreaking, totally cinematic, and totally in John Woo’s wheelhouse. What would the film have become, had Woo been at the helm – we’ll never know. But the trailers revealed a film that carried all the hallmarks of a seminal gunplay action videogame, including the noir look, along with gorgeous female stars, and Wahlberg, who was perfect for the role.

Max Payne’s director John Moore, was responsible for the classy action thriller Behind Enemy Lines, and the well made survival drama Flight of the Phoenix. Then he pieced together a tone-deaf remake of the classic horror The Omen, that went nowhere. What Max Payne had going for it, was a style, that carried over from the game, and some well created set pieces.

Another thing that Max Payne has, is a Blu-ray release that’s brimming with some fun to watch extras. From what I’ve read about the DVD edition, it too, has a good bunch of material for film buffs, and hardcore fans of the game. The Max Payne Special Edition DVD and Blu-ray Disc, both featuring a Digital Copy, are highlighted by an unrated and extended cut of the film, plus a never-before-seen animated graphic novel that delves deeper into Max Payne’s psyche, along with an in-depth production documentary on the making of the film. Part 1 is apparently on the DVD, however the entire production documentary is exclusively available on the Blu-ray edition.

Fans of disc extras, will certainly enjoy the 60 minute featurette Picture, the behind the scenes look at the making of Max Payne, which includes a good variety of cast and crew interviews, as they describe what it was like to be part of such a kinetic action production schedule.

Max Payne is one of those films enjoyed more in the Blu-ray format, rather than in theaters. The reason is that the action is well choreographed and the movie was shot in a rich noir style, both of which benefit from the crisp transfer.

There’s also a website at www.theworldofpayne.com worth mentioning, that has an online widget, and allows you to put yourself into the graphic novel. The site also includes the online graphic novel that was released with the film, as well as trailers, clips and photo galleries.