I was amazed at how much more I enjoyed Event Horizon this time around, compared to when I first saw the movie in 1997, when it was released. I have matured, but Event Horizon remains a modern classic sci-fi epic horror. 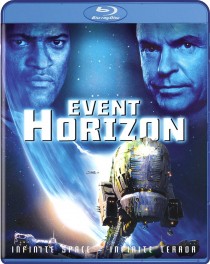 The name Event Horizon refers to a high-tech, pioneering research spacecraft that mysteriously vanished, without a trace, on its maiden voyage seven years past. But a weak, persistent signal from the long-missing craft prompts a rescue team, headed by the intrepid Captain Miller (Laurence Fishburne, The Matrix and Mission: Impossible III), to wing its way through the galaxy on a bold rescue mission.

Accompanying Miller on the voyage, is his elite crew and the lost ship’s designer (Sam Neill, Jurassic Park). Their mission is to find and salvage the state-of-the-art interstellar ship. What they find, through a series of brilliantly filmed and horrorifying incidents, is the real reason the ship disappeared.

Superbly acted, and extremely well lensed by Paul W.S. Anderson (that’s right), Event Horizon, is a must for sci-fi lovers, and a lesson in what makes quality horror, for filmmakers of that genre.

Below is a trailer for Event Horizon.