The popular romantic suspense thriller Ghost, starring Patrick Swayze, Demi Moore, and Whoopi Goldberg, was recently released on the Blu-ray format, thanks to folks Paramount Home Entertainment. It’s a film that deserves every bit of praise it’s ever received, and is one of those rare projects, that successfully blends dramatic and sci-fi elements, to move the plot, as well as audiences along. It has so much power, yet restrains itself, even given it’s obvious production quality, and the computer-generated effects wizardry that began taking center-stage in filmmaking at the time of it’s release – choosing instead to rely in old-fashioned storytelling and thrilling moments to keep us involved and at the edge of our seats. 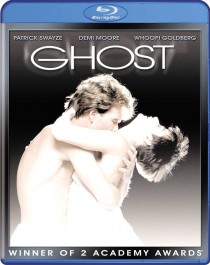 Ghost is one of the most memorable supernatural love stories ever made and a winner of two Academy Awards. Patrick Swayze, Whoopi Goldberg and Demi Moore, are perfect in a film that fearlessly went places few films before or since, have dared to go.

After the ghost of Sam (Swayze), discovers his death was no random robbery gone wrong, he enlists the help of a skeptical psychic (Oscar-winner Whoopi Goldberg), who doesn’t believe her in own abilities, so he can reconnect with the love of his life, Molly (Demi Moore), and solve his own murder. The powerful New York romance with a twist of the spiritual, Ghost is a stunner that has a wisdom and faith, that sends shivers up the spine, every time you watch.

Having the opportunity to view this classic tale in the Blu-ray format, was a pleasure. The film continues to surprise me, every time I sit down with it, and adds just enough punch to make you feel thrilled with every turn.

Below is a trailer for Ghost.