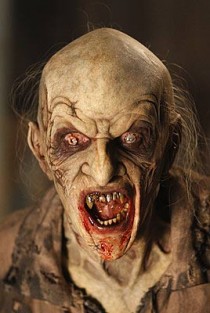 I just finished watching the premiere of Fear Itself on NBC. The television series is broken down into 13 separate 60 minute films fleshed out by today’s premiere horror writers and directors. Mick Garris, who brought us Masters of Horror on Shotime, and Masters of Science Fiction on ABC, created this one too. Of the three, Masters of Horror is the only one that truly works…at times.

Fear Itself begins with an ep. titled The Sacrifice, revolving around four criminals who take refuge in an isolated, snow-covered fort, and find three alluring, and very dangerous sirens, along with a beast that looks like The Creeper from Jeepers Creepers (unfortunately the only similarity to that film).

I was reared with steady doses of Friday the 13th, Don’t Answer the Phone, Maniac, The Hills Have Eyes, Re-Animator and the rest of the slasher-crazed hits of the 1980’s, making this watered down series of shadowy set pieces hard to take seriously. Speaking of shadowy, from a technical standpoint, when your shooting primarily in the dark, you’ve got to take more artful care with cinematography guys. I was watching my reflection in hi-def way too often.

However, I’m glad that some of the guys from those 80’s horror films I devoured growing up, are now getting serious coin from the mainstream, after years of fringe development. That said, based on the summer diet of reality shows and repeats the networks are promising us, I’ll take less than average horror any day. The thing is, each week is written and directed by another icon, so there should be some quality coming out of this series. I look forward to finding out.

Find out more about the show at www.nbc.com/Fear_Itself