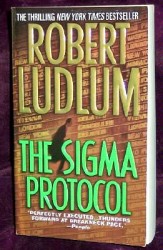 According to Variety, Universal has fast-tracked Robert Ludlum’s book The Sigma Protocol for an upcoming film.

Writers Art Marcum and Matt Holloway (Iron Man script) will write the screenplay, based on the late author’s novel, which was published in 2001.

The Sigma Protocol revolves around a young investment banker named Ben Hartman, who discovers a secret organization called Sigma has been manipulating the global economy. The organization is a multinational cartel built on the rubble of World War II by industrialists and financiers bent on exploiting wartime technology and protecting their wealth from communist threats. When the banker tries to expose the scheme, he’s targeted for death.

Writers Marcum and Holloway are also prepping a remake of Highlander, but according to the story, will pen the Protocol screenplay first. They also wrote Paramount’s upcoming Convoy film.

There is also a fourth Bourne movie on the way, with Paul Greengrass helming and Matt Damon again in the role of ass-kicker Jason Bourne.

Film Fetish Trivia: Robert Ludlum’s book The Chancellor Manuscript was sold to Paramount in 2005 for $4 million as a star vehicle for Leonardo DiCaprio. MGM and Relativity Media spent $3 million in early 2008 to beat out other studios, including Universal, to acquire Ludlum’s 1979 espionage thriller The Matarese Circle, with Denzel Washington attached to star.