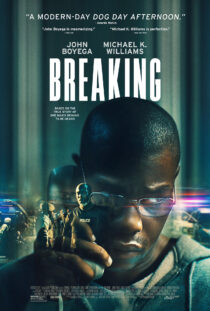 When Marine Veteran Brian Brown-Easley is denied support from Veterans Affairs, financially desperate and running out of options, he takes a bank and several of its employees hostage. The incident sets the stage for a tense confrontation with the police.

Breaking, which is based on a harrowing true story, stars John Boyega, Michael Kenneth Williams, Nicole Beharie, Connie Britton, Olivia Washington and Selenis Leyva. The film is directed by Abi Damaris Corbin from a script he co-wrote with Kwame Kwei-Armah.

Bleecker Street is set to release Breaking in movie theaters on August 26, 2022.