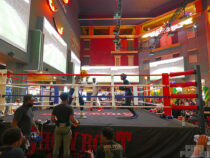 One would assume the discontinuation of casino gaming, followed a few years later by a worldwide pandemic-caused shutdown of the global economy, would have meant final call for the iconic Showboat Hotel and Resort in Atlantic City. But don’t tell that to Philadelphia developer Bart Blatstein, who purchased the resort in 2016 from Stockton University. He and his team at Tower Investments are leading what can only be called a remarkable comeback for the property, which first opened in March of 1987 as a 60,000-square-foot casino, luxury hotel, and 60-lane bowling alley.

Unfortunately, the bowling alley closed years ago, but entertainment and pop culture are leading the Showboat’s Phoenix-like resurrection. The hotel currently hosts one of the largest Horror Conventions in the State, the New Jersey Horror Con and Film Festival. It was also one of the New Jersey shooting locations for Zack Snyder’s Army of the Dead – which drops on Netflix tomorrow. But what will bring a more permanent fanboy and sports presence to the Showboat is the just-opened Lucky Snake Arcade and Sports Bar, a $7 million attraction that includes New Jersey’s largest gaming arcade at 100,000-square feet, a 25,000 square foot sports bar complete with 20-by-20 foot boxing ring, e-sports gaming area, live entertainment venues and a speakeasy.

Blatstein, along with Atlantic City Mayor Marty Small Sr., cut the ribbon at the grand opening for Lucky Snake at Showboat last Friday, May 14th, allowing select fans to get a sneak peak of the complex, which one might call a gamer and sports fan’s paradise.

Just some of the featured attractions at Lucky Snake include:

Tower Investments president Brandon Dixon said during a recent interview with Atlantic City Weekly that the company views the arcade as a benchmark for what is to come in the future with projects such as a planned waterpark concept and outdoor concert venue called The Dome, which will be located next to the hotel. According to that article, they are also planning a beer garden and sun deck, all of which Tower hopes to have open by summer 2022. All of which is planned to continue Atlantic City’s transition from strictly a gambling mecca to entertainment destination. From the looks of things, they’re off to a fine start.

Below is a gallery of photos I shot when I stumbled upon the Lucky Snake while in town for the weekend with family. It felt great to be seriously shooting again.